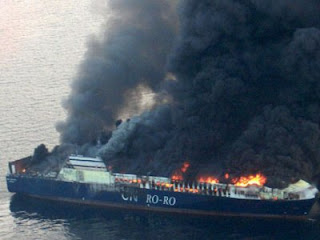 The fire that razed down a jetty of the Nigerian Navy in the Niger Delta Area recently may be as a result of explosives planted in the jetty by a twenty –three- year –old lady of Ijaw ethnic stock.

The lady whose name was given as Askiye from Bayelsa state is a frequent visitor to the jetty especially on weekends when she and other girls from the riverine areas go to naval and other locations in search of fun.Askiye and her friends we gathered were usually brought into such locations by professional pimps.

Our source revealed that in the case of Askiye, most naval officers liked her because of her beauty and brilliance. She, according to our source is not attached to any officer, but goes with any who can afford to pay for the fun.

The beautiful Ijaw damsel have often been seen in the company of a British explosives expert named Steve, a mercenary on the payroll of MOVEMENT FOR THE EMANCIPATION OF NIGER DELTA(MEND).

Hours preceding the blast, our source continued, Askiye was sighted at the jetty carousing with naval officers, but disappeared a few minutes before the blast.

It will be recalled that fire from a blast destroyed a Nigerian Naval jetty on the early hours of Friday 21st March, 2008, in which some Naval personnels lost their lifes and some gunboats destroyed.

MEND claimed responsibility for the fire. Naval authorities however, denied sabotage and blamed the fire on faulty electrical circuit.
Posted by PublicInformationProjects at 10:04