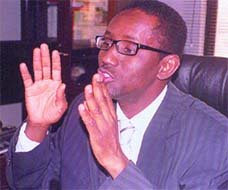 Mr. Nuhu Ribadu, erstwhile Executive Chairman of Economic And Financial Crimes Commission(EFCC),who is undergoing a one-year-course in strategic studies at the prestigious Nigerian institute of Policy and Strategic studies(NIPSS),during his tenure at the anti-corruption Agency almost convinced everybody that he was an incorruptible anti-corruption crusader.

The recent probe of the NATIONAL INTERGRATED POWER PROJECT(NIPP)by the Federal House of Representatives, which have so far uncovered frauds totalling thirteen billion US dollars has however, put a lie to Mr. Ribadu's anti-corruption pontifications.The IPP fraud happened during Ribadu's tenure at EFCC.

Inside sources in Nigerian National Petroleum Corporation(NNPC)and Nigeria Customs Service(NCS)told us that if the operations of these organizations during same period are probed, the NIPP frauds will pale into insignificance.
Posted by PublicInformationProjects at 04:29