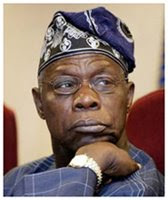 Associates of the immediate past President of Nigeria, Rtd. General Olusegun Obasanjo after a period of serious brainstorming have come out with schemes to solve once and for all, what they call "the Yar'Adua problem".

Sources inside the Obasanjo caucus informed us that for sometime now, members of the caucus have been watching with subdued anger, the various actions of President Yar'Adua which they believe were all aimed at diminishing the political stature of their principal, despite the fact that the immediate past President single handedly installed him(Yar'Adua)as President.

Consequently, our sources continued, the Obasanjo think tank have come up with their own strategies to counter "the Yar'Adua onslaughts".

The first strategy in the Obasanjo caucus kitty is to use their members in the Yar'Adua administration to leak damaging information about happenings inside the administration to the news media. The recent damaging story on the President's wife done by an online news publication, is believed to have been leaked by an official of the foreign ministry on the instruction of the foreign Minister, Mr. Ojo Maduekwe, a close associate of former President Obasanjo.

The second strategy we were told, is for members of the caucus in the national assembly to be on the look out, through their oversight functions and to leak to the news media any inappropriate acts by any officials considered to be very close to the President.

The last but not the least strategy is to assemble facts about how the President's late elder brother, Shehu Yar'Adua got his stupendous wealth and where he invested them. The late Shehu Yar'Adua is believed to have illegally enriched himself when he served as military Vice-President in the first administraion of Obasanjo between february 1976, and september, 1979.

These facts our sources insisted, have been assembled, including a surprised finding that the late Shehu Yar'Adua registered a family trust fund outside Nigeria, in which the President is a beneficiary, with his illegally acquired wealth.These facts we were told, will soon be presented to the President.

We have not been able so far to independently confirm the exisence of a Yar'Adua family trust fund.
Posted by PublicInformationProjects at 05:01