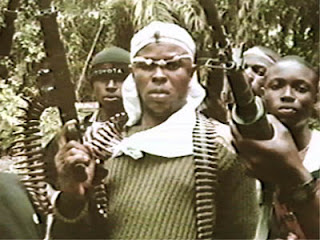 The recent intelligence report by the joint taskforce on security(JTF), of imminient attacks by Niger Delta militants on major oil platforms and cities in the region has been described as a ruse by sources inside the various militant groups.

Our reporters who visited militants' camps under cover in Rivers, Delta and Bayelsa states, report that the creeks are calm except for some flashes of sea piracy and other minor criminal activities.

This calm is attributable to serious depletion of weapons, occassioned by several months of heavy fighting with the JTF.

Another factor responsible for this calm is the lost of main sources of arms supply following the arrest and detention of Mr. Henry Okah in September, 2007. Okah, we reliably gathered was the militants' major contact with these supply sources.

On Ateke Tom, we learnt that he has been on the move since the invasion of his camp in December, 2007 by the JTF, which according to security experts, makes it almost impossible for him to organize for serious attacks of the magnitude described by the JTF. "the so called boylov said to be collaborating with Ateke is only a freelance fighter with no command experience", insisted a source.

We also learnt that Ijaw leaders are piling lots of pressure on the militants to stay calm atleast for now and watch the direction of the Henry Okah treason trial. Ijaw leaders are secretly pressing for a political solution to the Okah problem.

Pressed for reasons why the JTF released a ruse as an intelligence report, a source who is a retired Army captain, told us that these "bogus" intelligence reports are released from time to time, to paint a picture of insecurity, so as to get a sizeable chunk of the Governors' huge security votes.

We have independently confirmed that the JTF is now a money making machine for military officers from the western and northern axis of the country.

One of our editorial consultants, who sought to see the JTF spokesman for comments on this report was turned back by soldiers on guard duty who claimed to be acting on orders from the JTF commander.
Posted by PublicInformationProjects at 04:49