NIGERIA'S PRESIDENT SLIPS IN AND OUT OF COMA 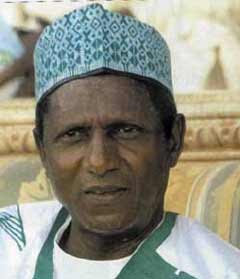 Following recent serious deterioration in the health of the Nigerian President, Mr. Umaru Yar'Adua, which necesitated cancellation of the public signing ceremony of the 2008 Appropriation bill into law, the President has been flown to a German hospital for treatment. We do not know the name of the hospital yet.

We learnt that on the eve of the signing of the bill, the President, who has been seriously ill before emerging as the country's leader, developed complications associated with kidneys and lungs malfunctioning, and consequently slipped into coma. He was rushed to Aso Rock clinic where he was eventually revived. Sources informed us that doctors at the clinic recommended complete rest and medical
treatment abroad.

"This was the reason why Mr. President signed the budget in a private ceremony," a source volunteered. We were further informed that after signing the Appropriation act, the President slipped into coma again and was revived by the first lady and his personal physician."This coma problem continued till Mr. President was flown to Germany", our source further volunteered.

It will be recalled that when the Peoples' Democratic Party(PDP) presented the then Governor of Katsina state, as its presidential flagbearer for the 2007 presidential election, much was made of Mr. Yar'Adua's condition of health. It was alleged that his health could not withstand the rigors of Presidential schedules, infact the then PDP presidential candidate collapsed after one of his campaign rallies and was flown to Germany for medical attention. The PDP however, insisted that he was healthy and capable of discharging the responsibilities of the office of the President if elected. It maintained that its presidential candidate collapsed due to stress occasioned by the rigorous campaign schedules.

We have not been able so far to monitor the President's condition because we do not have source(s) in Germany where the President is currently undergoing treatment.

The President's chief publicist has however, said that his boss is responding to treatment and will be back on seat soon.
Posted by PublicInformationProjects at 04:48