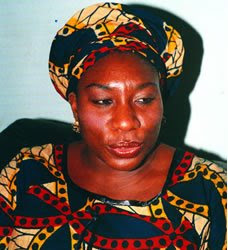 The daughter of Nigeria's immediate past President, Rtd. General Olusegun Obasanjo, who is wanted by the Economic and Financial Crimes Commission(EFCC)in connection with alleged financial crime, Mrs. Iyabo Obasanjo-Bello, a Senator of the Federal Republic of Nigeria, has hatched a plan with her political allies to blackmail the Administration of Mr. Umaru Yar'Adua. The ex-President's daughter was at the weekend(19th and 20th April, 2008)hiding in a guest house at the Maitama Area of the Federal capital territory, said to belong to Mr. Andy Uba, her father's special Assistant on domestic affairs from 1999 to 2007.

Mrs. Obasanjo-Bello's current travail started when investigations into an alleged sharing of a 2007 unspent budget of the federal ministry of health by the Ministers and senior officials of the ministry, revealed that the ex-Presdient's daughter in her capacity as chairperson of the senate committee on health collected the sum of ten million naira from the fund for her committee's retreat in Ghana. The Ministers have since resigned and have been arraigned with senior officials of the ministry in court.

The ex-President's daughter we learnt was co-operating with the EFCC, till a plan was hatched by her political associates, most of whom were her father's godsons and daughters, who are not happy the way their principal is being rubbished,to blackmail the Government with the matter, disappeared after alleging threat to her life.

We were reliably informed that Mrs. Obasanjo-Bello and her friends want to use her current travail to potray the Government as callous and intent on using illegitimate means to eliminate whoever that is connected to Obasanjo.

We were also reliably informed that the Senate President and some Senators that are very close to her have been speaking to her on phone in their private capacities, since she disappeared. We have not confirmed if these senators know her whereabout.

A source in EFCC informed us that politicising the matter will not help the hiding Senator, "our office will take the matter to a logical conclusion" she concluded. The Senate as an institution has mandated some of its officials to locate the whereabout of its furgitive member.

The House of Representatives has however, advised Mrs. Obasanjo-Bello to come out of hiding and answer the charges preferred against her.
Posted by PublicInformationProjects at 05:03