Yes, The Spate Of Kidnappings For Ransome In Imo State Is Politically Motivated‏

I am deeply troubled by the increasing spate of kidnappings for ransom that has become a regular feature of daily life in Imo State. I have also heard of armed robbers operating in motorbikes double-crossing and robbing people of cell phones, jewelries and cash along the streets in the daylight. From far away Washington DC where I am currently doing a research fellowship on Police Reform in Nigeria, I have read from local news, through the internet ,incidents of kidnappings of wives and children of wealthy people in Imo State by criminals who demand huge sums of money in ransom. Before now, kidnappings and abduction for ransom were restricted to the Niger Delta where militants agitating for resource control were targeting mainly foreign staff of oil companies. Anambra State also witnessed criminal abductions sometime last year when some wealthy businessmen fell victim to kidnappers who were demanding ransom to free them. This was a purely criminal money-spinning venture. The type that was first recorded some years ago in Imo State was motivated by vendetta. The child of a medical doctor was abducted by some people who wanted to settle scores with a politician by stealing the corpse of a politician’s late father from the doctor’s mortuary, in order to recover their withheld share of loot from this politician. The doctor refused to cooperate with them and they had to kidnap his son and demanded ransom. I don’t remember the details of what followed. But the phenomenon which has assumed a frightening dimension in Imo State is probably politically motivated. Quite a number of kidnappings for ransom have been recorded in the last few weeks. And what amazes me is how politicians and public officials are involved in negotiating with these criminals; and law enforcement officials are completely helpless, thus rendering citizens hopeless and vulnerable.

I suspect that this development is masterminded by disgruntled PDP politicians who feel that Governor Ohakim may have denied them access to Imo State public treasury, or ‘breached faith with them’ over certain criminal and self serving evil bond they may have entered with him as a condition for helping him up to power. This may appear to be a re-enactment of the Ngige-era scenario in Anambra State, when corrupt and selfish politicians led by a nitwit,with the support of a megalomaniac President, unconscionably held Anambra State under siege and unleashed a harrowing and subversive terror against Ngige-whom they admittedly rigged into office- for refusing to hand over control of the destiny and commonwealth of the State to them.

Before now, there have been similar criminal and disruptive activities in Imo State. One of such was the early morning attack on a driver of one of the distribution vehicles of a national newspaper. The attackers attempted to leave the impression that the attack came from Imo State Government quarters in revenge for a distasteful story written by the newspaper on Ohakim. It became apparent that it was political enemies of the governor that masterminded the attack and made it appear as though it was Ohakim in order to sabotage and discredit his government.

It is appalling how politicians can sacrifice citizens’ personal security and endanger public safety in a nefarious bid to settle political scores. This cannot be allowed to happen in any country where the rule of law reigns, and where leaders know their responsibilities, and are capable of fulfilling them. The challenge before Ohakim is to fulfill the raison d’être of leadership: guarantee public welfare and security. Ohakim must rise to the occasion and guarantee the protection of public safety and personal liberty and security. He must confront these criminals headlong. Let him work out, with the police- both at the state and national levels, how to checkmate these criminals. It is embarrassing that people can make a living by compromising the liberty and safety of fellow citizens. The criminal act of kidnapping innocent women and children, no doubt goes with a lot of trauma, both for the victim and the relatives. And who are those public officials negotiating with these criminals? What is their stake in all this? Can’t they be questioned, and through them, track down these undesirable elements in society? If Ohakim cannot stop this madness, then let him throw in the towel, as it is done in all civilized societies. 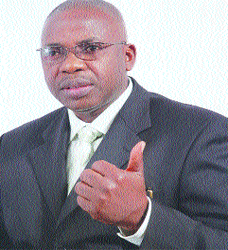 The governor of Imo state of Nigeria, which also goes by the name,"HeartLand State", Dr. Godson Ikedi Ohakim is presently in fiece political battle with some top politicians in the state.

The most worrisome aspect of the security report was the revelation that some displaced militants from Rivers, Bayelsa and Delta states have been hired to make the state ungovernable. A senior security source who analysed the report, confirmed its authenticity.

Independent investigations by chidi opara reports indicated that the battle is centred on the sharing of the spoils of office. it is also discovered that the Governor is planning to hire members of MOVEMENT FOR ACTUALIZATION OF SOVERIGN STATE OF BIAFRA(MASSOB), to counter his opponents. An Imo state government house official who took our telephone call, but refused to disclose his name, however, denied this.

chidi opara reports further learnt that the nomination crisis that engulfed PDP in the 2007 gubernatorial election was responsible for the present state of affairs.

PDP, which was then the ruling party in the state had entered into a gentleman's agreement with Dr. Ohakim of the Progressive Peoples Alliance, on the sharing of the spoils of office. PDP, in the spirit of the agreement used its massive machinery to get the then PPA gubernatorial candidate elected. Ohakim, on assumption of office, according to a PDP official in the state, "reneged on the agreement".
Posted by PublicInformationProjects at 05:27