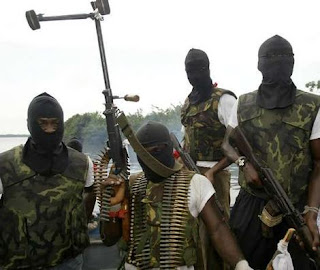 The operations of the Joint Taskforce(JTF) on security in Nigeria's Niger Delta region, comprising the Army, Navy, Airforce, Police and the State Security Service, established by the Olusegun Obasanjo administration to take over the problematic security situation in the region, occassioned by militant activities, is presently being marred by inefficiency.

This inefficiency may have emboldened criminal elements in the region, who now operate under the guise of being militants, to attack security personnels. Recently, at the ever busy waterlines junction in the heart of Portharcourt, Rivers state, Nigeria's major oil state, hoodlums stopped and shot dead a soldier riding a motocycle in broad daylight. The junction is less than a kilometre from the JTF main base.

A JTF source told chidi opara reports that gross lack of funds have resulted into dearth of essential operations equipments like gunboats and helicopter gunships. Our source further volunteered that the "few outdated" gunboats available are being used to "escort oil companies' barges and tugboats". These companies we gathered, pay handsomely for this service. We were however, not able so far, to independently confirm this. Funding, according to our source, have been left solely for the state governors in the region.

chidi opara reports, also reliably gathered that JTF operatives are not well trained in modern rifle usage. We learnt that the standard basic proceedure in modern rifle usage is that every rifle user is supposed to "zero" his rifle. This means that the rifle should be configured to the user's requirements for every operation. This proceedure, which we learnt have not been in practice in JTF is usually learnt during "Range Classification" training sessions.

When chidi opara reports sought the comments of JTF spokesman, Lt. Col. Musa Sagir, he said that the fact that there is relative peace in the Niger Delta region, especially in Rivers State, means that JTF is still efficient. He explained further that the JTF is fighting an "asymentrical warfare", which means that "your enemy knows your position, while you dont know his", this type of warfare, according to him, is usually more tasking than the conventional one. On operations equipments, the JTF spokesman said that the Army, Navy, Airforce, Police and State Security service operations equipments are all at the disposal of JTF. He disclosed that escort services for oil and gas companies are part of JTF brief. These companies, according to Lt. Col. Sagir, only pay duty allowances to the operatives used for the service. He concluded by saying that "Range classification trainings are standard proceedures in the military and in other para-military bodies, which JTF operatives are part of".
Posted by PublicInformationProjects at 05:21