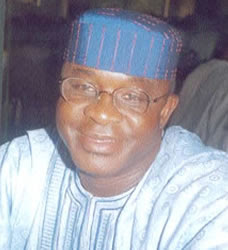 The grandstanding of the Nigerian Senate regarding the assumption of duty of the newly appointed chairperson of the Economic And Financial Crimes Commission(EFCC), Mrs. Farida Waziri will appear to less discerning minds as an adherence to due process, but reliable information reaching chidi opara reports, points to the contrary. Mrs. Waziri was prevented from assuming duty at the Commission by the Senate, who insisted that her appointment must be confirmed by the upper legislative body before she can assume duty, even on acting capacity.

chidi opara reports learnt that the pro-Obasanjo elements in the Senate, having watched with keen interest the informal policy of "pull Obasanjo down at all cost" in the Presidency, being co-ordinated by secreatary to the federal government, Mr. Babagana Kingibe, and sensing that the change of guard at the anti-corruption Commission is part of the policy, decided to use their numerical strength and influence to stall Mrs. Waziri's assumption of duty, till there is "a solid" assurance that the Commission will not prosecute the immediate ex-President and/or any of his allies, "even if the probes unearth enough evidences". The pro-Obasanjo elements control the leadership of the Senate.

A pro-Obasanjo Senator who pleaded not to be named told chidi opara reports that " we are settling our differences with her". One of the attempts at settling these differences we can now reveal, was a meeting between Mrs Waziri's emissaries and some pro-Obasanjo Senators in the early hours of sunday, june 1st, 2008 at Osun state lodge in Abuja. The out come of the meeting was not known to us at the time of posting this report.

A national Assembly source when approached for information on the Farida Waziri saga, simply volunteered that "she may be confirmed any time from now".
Posted by PublicInformationProjects at 02:40