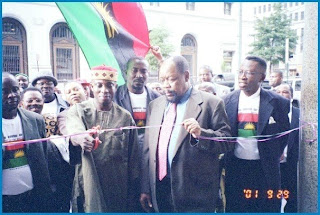 The recent rumbling in the MOVEMENT FOR THE ACTUALIZATION OF SOVERIGN STATE OF BIAFRA(MASSOB), an organization fighting for the actualization of the defunct Republic of Biafra, which resulted in the resignation of the organization's acting director of information, Mr. David MacDavies, have deepened with officials pointing accusing fingers in the direction of Rtd. Lt. Col. Chukwuemeka Odumegwu-Ojukwu, the progenitor of Biafra. Ojukwu is a folk hero amongst the Igbos of South-Eastern Nigeria, where MASSOB is fighting to re-establish Biafra.

Some MASSOB officials who spoke to chidi opara reports on condition of annonymity, apparently for fear of reprisal, explained that MASSOB, unknown to them at the onset, was formed by Ojukwu, through the Biafra foundation, to arm twist the Federal Government of Nigeria to "service his political and business interests". We have not been able so far to independently confirm this.

These officials further revealed that Ojukwu advised Mr. Ralph Uwazuruike, the MASSOB leader, recently to soft pedal on the Biafra agitation, since the Federal Government under President Yar'Adua, does not meddle in the affairs of Anambra State like the immediate past administration. Ojukwu hails from the state, and is believed to be very close to the governor, Mr. Peter Obi, who won the governorship on the platform of ALL PROGRESSIVES GRAND ALLIANCE(APGA), Ojukwu is the national leader of APGA.

The acting director of information of MASSOB, recently called a press conference at which he announced his resignation, citing betrayal of the agitation by the leader of the group as his main reason.

Attempts by chidi opara reports to establish contacts with Ojukwu and/or Uwazuruike for comments have so far proved abortive.

An e-mail sent to Biafra foundation has not been replied at the time of posting this report.
Posted by PublicInformationProjects at 11:35