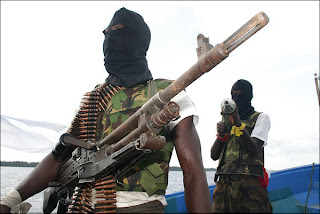 The recent spate of attacks on crude oil platforms by the MOVEMENT FOR THE EMANCIPATION OF NIGER DELTA(MEND), may not have come as a surprise to JOINT TASKFORCE ON SECURITY(JTF) field operations commanders.

A detailed report, submitted to the top echelon of Nigeria's security leadership earlier this year(2008), made available to chidi opara reports, warned of massive stockpiling of sophisticated weaponry by the various militant groups in Nigeria's Niger delta region. The document also revealed a massive well co-ordinated clandestine militants recruitment drive. The report marked "RESTRICTED", dated 17th january, 2008 and signed by a middle level JTF field commander, revealed further that the main concentration of militant groups are at Nanabie and Igbomina Islands of Rivers State. Nanabie, according to the report, is in the Opobo Area, while Igbomina is said to be in the Andoni/Bonny axis. The document went further to reveal that Okerenkoko community in Delta State still hosts a sizeable number of militants, while Doulse Island in Rivers state is the new domain of Mr. Tom Ateke, a dreaded militant who was driven out of his Okirika, Rivers State domain in december, 2007, by the JTF. Ateke is said to be operating "camp one and two" on the Island. The report ended with recommending "beachlanding operations" "to rout the militants and to mop up their weapons". A top level security personnel who evaluated the document for chidi opara reports, certified it genuine.

A JTF source volunteered that the major reason for the kid glove approach to fighting militancy in the Niger delta region is because "most of our big men are involved in illegal oil bunkering". If full scale military action is ordered, our source continued, "we will destroy all their bunkering vessels".

There have been an increase in incidences of bombing attacks on Nigeria's crude oil platforms in the Niger delta, with MEND claiming responsibilites in most of the attacks.

It will be recalled that the Presidency's reaction to these attacks was an order to JTF to find and apprehend the perpetrators of the acts.

MEND have however, dismissed the order as unserious and subsequenly, declared a unilateral ceasefire, effectve from tuesday, 24th june, 2008.
Posted by PublicInformationProjects at 02:53