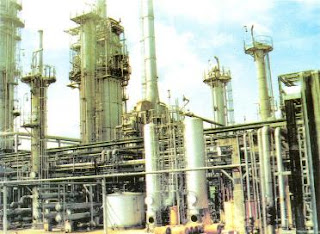 The Portharcourt refining company(PHRC), a subsidiary of Nigeria national Petroleum Corporation(NNPC), the holding company responsible for the management of Nigeria's economic mainstay, petroleum, is stinking with corruption.

The main function of the refinery as the name entails, is to refine petroleum products for internal consumption. Reliable inside information reaching chidi opara reports however indicate a systematic sabotage of this main function by a combination of PHRC and NNPC senior managers, aided by some influencial oil sector operators and Politicians.

The complete repair of the refinery, "which would have raised operational capacity to a considerably high level", would have been effected by now, if not that this cabal who are profiting immensely from the status quo "keeps advising the government otherwise".

The crudes to be refined locally are most times, according to our source, sold at higer prices at the international market, and imported into the country as refined products, "since the refinery according to them cannot be repaired". This system, our source insists, ensures that there is enough money to be diverted into private pockets and business for members of the cabal who are importers of petroleum products.

Another antic of this cabal is delay in delievery of imported premium motor spirit(PMS). We were informed that imported PMS are expected to be high octane gasoline(HOG), with minimum scientific rating of ninety-two to ninety-four percent RON. This would be blended with an intermediate product called naphtha to get larger quantity of PMS with acceptable minimum RON of eighty-two to eighty-five percent. These delays are designed to ensure that when these products which come with less than eighty percent RON, are finally delievered, they would be accepted, due to the fact that the depot tanks would have been almost empty and there would be need to prevent product scarcity. This racket ensures that PMS of lower quality is accepted in place of that of higher quality paid for.

chidi opara reports gathered that due to this blackmail, the refinery tanks as at june 27th, 2008, had less than 1.5 million litres of PMS. "This quantity was to last for a maximum of two days". When the PMS was eventually delievered on 29th june, 2008, "it was lower in quality than what was paid for", a senior PHRC engineer whispered to us.

We could not so far establish contact with PHRC or NNPC public affairs departments for comments, as repeated calls to their telephone lines published on the Internet could not go through. We will however, publish their reaction if received.
Posted by PublicInformationProjects at 04:08