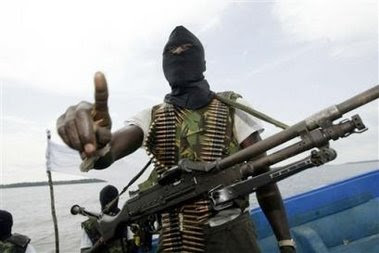 Following the promise of Mr. Gordon Brown, British Prime Minister, to offer unclarified assistance to the Nigerian government, to curb what he called lawlessness in the Niger Delta region, there have been high pitch preparations in the camps of the main militant groups in the region.

The British Prime Minister, according to news media reports had made the offer of assistance following a plea made by the Nigerian President, Mr. Umaru Yar'Adua at the recent G8 meeting, to World leaders to discourage dealings in stolen crude oil, likening it to stollen "blood" diamond. A substantial quantity of crude oil from Nigeria to the International markets come from illegal crude oil bunkering, a polite name for crude oil stealing.

The offer of assistance which necesitated the call off of the unilateral ceasefire by the MOVEMENT FOR THE EMANCIPATION OF NIGER DELTA(MEND), chidi opara reports learnt, is a threat not being taken lightly by the major groups in the creeks of Niger Delta.

Our contacts inside the main militant groups reported high pitch preparations in the camps at Nanabie, Igbomina, Doulse Island, Okerenkeko and Ekeremuo. chidi opara reports learnt that large quantities of arms and ammunitions hidden in various coastal villages are now being moved to locations that will make them easily accessible, "incase of any eventuality".

At the Doulse Island camp one and two run by Mr. Tom Ateke, our contact reported the presence of about seven witch doctors preparing charms for the fighters. Stockpiling of bottle water, beverages and foodstuffs, as well as cleaning and oiling of rifles were also reported.

At Igbomina, our contact reported the presence of two white males in their forties in training sessions with the militants on the use of ground to air anti-aircraft missiles. Militants in Nanabie camp, according to a contact, are kept busy with unarmed combat training sessions.

Reports from our contacts in Ekeremuo and okerenkeko camps indicate "an atmosphere of readiness". Militants in these camps are said to spend hours drinking, singing and dancing, with occassional gun shots into the air.

Contacts close to Boyloaf, MEND's second-in-command and Tom Ateke, informed chidi opara reports that "the gods of Ijawland are ready for Britain".
Posted by PublicInformationProjects at 03:14