Britain To Nigeria: "Dance To Our Tune Or No Military Assistance" 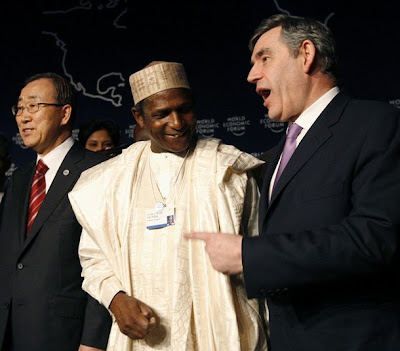 Indications point to possible directions of Nigeria's foreign policies from the seat of British government in London.

This revelation came from a source close to a member of the delegation that accompanied the Nigerian President, Mr. Umaru Yar'Adua to London recently on official visit.

chidi opara reports gathered that the Nigerian President, desperate to enlist the support of Britain, Nigeria's former colonial master and an influential player in international politics to fight the problem of "blood petroleum", an alias for stolen petroleum, so as to boost the dwindling revenue base of the African oil producing nation, necesitated by the activities of petroleum stealing syndicates, had agreed to all of the British Prime Minister's conditions, one of which was to support British view points on major international economic and political issues, especially those on Africa.

The British Prime Minister, Mr. Gordon Brown, according to our source, had blamed African countries like Nigeria and South Africa for the refusal of the Zimbabwean leader, Mr. Robert Mugabe, to negotiate power sharing with the country's opposition leaders. "Mr. Brown was not happy with our non challant attitude to the Zimbabwean crisis", the source volunteered further.

We also gathered that the British Prime Minister made it clear that his government will only be willing to sign agreement with Nigeria if the Nigerian government refuses to recognise the government of Mr. Mugabe, to start with.

chidi opara reports can now report that the Nigerian President was only too willing to accept all the conditions, whereupon, an agreement for military assistance to manage the Niger Delta crisis was signed.

We could not so far ascertain what the other conditions were, a source in the British high commission in Abuja, Nigeria's capital city, however, informed us that "the conditions are favourable to both parties".

It will be recalled that immediately the Nigerian President returned to Abuja, the Presidency issued a statement dissociating the Nigerian government from the government in Zimbabwe.
Posted by PublicInformationProjects at 10:19