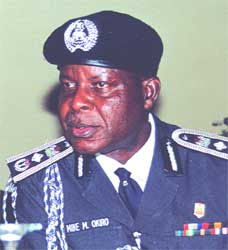 The Onne seaport Mafia dislodged by the Olusegun Obasanjo regime in 2004 is currently staging a bruttal comeback.

These attributes eminently situates the seaport as the major import/export outlet servicing the oil and gas sector of the economy and the ever busy Onitsha and Aba commercial nerve centres.

These activities have in recent years given rise to the emergence of a mafia, masquerading as an association of clearing and forwarding agents, who organize import and export rackets of all kinds. These rackets range from evasion of import duties to smuggling of prohibited goods and arms running.

As the mafia grew in strenght and influence due to a huge war chest of slush funds at its disposal, it became a threat even to the government of the time, prompting the immediate past Administration to clip its wings in 2004 by flushing out its plants in strategic Customs and Ports Authority positions, through whom these rackets are perpetrated.

Well placed contacts in Onne seaport informed chidi opara reports that the mafia are seriously planning to stage a comeback, due to the exit of the immediate past Comptroller-general of Customs, whom we reliably learnt had a potracted battle with them. The comeback plan chidi opara reports can now reveal is being financed by a former Customs comptroller, who served in Onne seaport as Area Comptroller. The Edo state born former Comptroller, our contact revealed, had a case with the Economic And Financial Crimes Commission(EFCC), but was let off the hook because of his closeness to a Peoples' Democratic Party(PDP) top notcher from his state. The plan according to another contact, which involves the installation of the former Comptroller's business front, a middle aged male clearing and forwarding agent from Mbaise in Imo state as a chapter chairman of a major clearing and forwarding Association in Onne seaport is being co-ordinated by a wealthy Portharcourt based clearing and forwarding agent from Isiukwuato area of Abia state, said to be very close to a retired Major-general from his state.

A security contact in Portharcourt informed chidi opara reports that "our bigmen are on their payroll". We learnt further that some prominent traditional rulers, National Assembly members and Editors of some influencial main stream news media are also on the payroll of the mafia.
Posted by PublicInformationProjects at 02:05