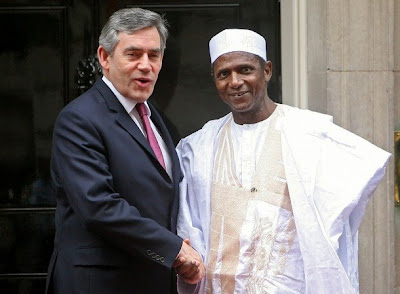 The military assistance agreement, which Nigerian President, Mr. Umaru Yar'Adua signed with his British counterpart, Mr. Gordon Brown in London last month(July), which has been severally denied by Nigerian Presidency spokespersons was given life when five British counter-insurgency experts arrived Nigeria on friday 8th, August, 2008 to commence secret training sessions with operatives of the Joint Taskforce on security(JTF), an adhoc security apparatus created by the immediate past Administration to manage the security situation in the volatile Niger Delta region.

The trainers, all males, between the ages of thirty-five and fifty, arrived Lagos, Nigeria's former capital city in the early hours and were according to a reliable Defence Ministry contact, driven by road to Yenagoa, capital city of Bayelsa State, after a meeting with two British embassy officials,(a middle aged white male and a black lady in her late twenties), and a Defence Ministry representative.

chidi opara reports gathered that on arrival in Bayelsa state, The British military experts met with a middle rank JTF unit commander, a state security service operative and a security personnel from Bayelsa state government house, before being driven to portharcourt, where they were lodged for the weekend in a guest house along Forces Avenue, old G.R.A. A contact in Portharcourt informed us that the British counter-insurgency experts have been moved out of the guest house this morning(Monday 11th, August, 2008) to a secret location outside Portharcourt, where they are expected to meet with some repentant former militants. We are unable to ascertain the present location of the British military trainers at the time of preparing this report, a civilian contact who lives in the military barrack in Portharcourt, popularly known as Bori camp however, suspects that the Brits may be lodging at the military facility in Elele, a sub-urban area, close to Portharcourt.

The Nigerian Presidency have severally denied any military assistance agreement with Britain, but chidi opara reports gathered that these denials may have been a way of deflating negative public opinions against the military option, there was infact a protest by Nigerians in London against the move to bring in the British military into the matter on the eve of signing the agreement. Another reason for the denials according to security analysts, may be due to the need to fully exploit the elements of surprise, necesary, according to these analysts, for the success of the operation, still tentatively code named "operation baby hawk".

We are unable so far to ascertain the mode of training to be given to the Nigerian adhoc security operatives at the moment. One of our Defence Ministry contacts is however, speculating that "the training may start with how to operate sophisticated survillance equipments".
Posted by PublicInformationProjects at 04:09