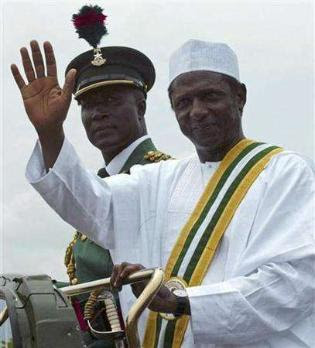 The recent shake-up of the top military echelon in Nigeria, which flushed out the Chiefs of the Army, Navy, Defence and elevated the erstwhile Airforce chief to the topmost defence position, was a move by the Nigerian President, Mr. Umaru Yar'Adua to forestall a military coup that would have terminated his Administration.

The coup buzz have been on in the innermost security circles for some time now. The Yar'Adua Administration have been grappling with discontent within very influential power groups, especially the military.

This discontent mainly arose as a result of perception in these groups that the Nigerian Presidency have been hijacked by a tiny but powerful cabal, consisting mainly of the President's personal friends and relatives, who now corner major government patronages and clear major policies before they are presented to the Federal Executive Council(FEC).

These power groups, according to contacts within, feel that the remedy to being shut out of the corridors of power, is to "forcefully change this government." Especially, according to these contacts, "now that the Supreme court is bent on legitimizing Yar'Adua's illegitimate Government."

It will be recalled that chidi opara reports recently published a report titled "Military Coup Immenient In Nigeria." The report ran thus:

"An unconsitutional take over of Government in Nigeria by the Military, appears to be imminent according to buzz in the intelligence community.

The low and middle level officer cadres, especially in the Army have been increasingly restive since the begining of the year, Intelligence sources whispered to us.

We gathered that since May,2007 when the Government of President Umar Yar'Adua was sworn into office, the low and middle level officer cadres have been more than ever polarized along political lines.

There are Officers who benefitted immensely from the Administration of the immediate past President, Rtd. General Olusegun Obasanjo, but suddenly discovered that the present Administration is not ready to allow the status quo ante to continue, but have been busy building its own band of loyalists in the Military. These officers according to sources, seeing that there is no possibility of a return of the Obasanjo years have become increasingly restive.

Another group are Officers loyal to politicians who lost out in the last general elections. These officers benefitted from these politicians in the area of lucrative postings.These Politicians normally use their influences to pressurize Defence Ministry authorities to post their godsons to areas considered to be lucrative.Since the last general elections in which most of these Politicians lost their positions and consequently, their influences, their godsons have not been having things easy.

The last group, sources continued, are patriotic officers,whose restiveness have to do with "the way the country is drifting aimlessly since the Yar'Adua presidency came on board".This group mainly point to the Niger Delta Region where security personnels, especially members of the Armed Forces are being killed almost on daily basis,"yet politicians sit in Abuja and negotiate with these criminals". This group had hoped "that the 2007 general elections would usher in purposeful political leadership in Nigeria" but have discovered that the current political leadership is "an old wine in a new wine jar".

One common problem these groups have is how to convince the International Community, Advocacy groups and the general public of the need to change the government through coup.We gathered that one the groups have been trying to recruit influencial news editors and publishers for this purpose.We have not been able so far to confirm this, we are however, on the trail of news editors and publishers suspected to have been contacted.

An enquiry on this sent to Defence Ministry spokesman have not been answered so far, but a senior Military Intelligence source told us that "Military Authorities are keeping close tabs on these groups of officers and will move in if they over step the bounds".
Posted by PublicInformationProjects at 04:10