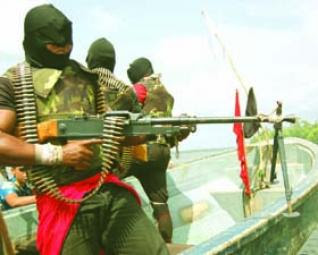 The coup scare that have become the order of the day since the assumption of office of the Nigerian President, Mr. Umaru Yar'Adua on 29th of May, 2007 have continued to amass victims.

The latest victim is the news media, whom the Defence headquarters spokesman recently accused of consorting with the main Niger Delta militant group, MOVEMENT FOR THE EMANCIPATION OF NIGER DELTA(MEND), to destabilize the Nation.

MEND had in a recent online press release, claimed that they had a shootout with the joint taskforce on security(JTF), an adhoc security outfit established to manage the crisis in the oil rich region. The JTF, the release claimed lost twenty-nine soldiers, while MEND lost four of its fighters. The Defence headquarters swiftly denied any encounter with any militant group that would have resulted in any loss of soldiers.

The subsequent wide publicity given to the MEND position which insisted on the authenticity of its claim, sent the Defence headquarters into a state of panic, resulting into a secret resolve by the top echelon of the topmost military institution to clampdown on a section of the news media regarded in security circles as "very stubborn".

A high level Defence headquarters contact who called chidi opara reports on tuesday(2nd september,2008), sounded very worried. The contact who pleaded to us to scale down our Defence reports, revealed that a security report on the desk of the new Chief of Defence staff, indicates that there is increased restiveness in the middle level officer cadre of the services, as a result of the MEND story. This cadre of officers, the contact further told us, have not been happy with the way the Niger Delta crisis is being handled. "These officers are not happy that soldiers are being slaughtered like chicken in the creeks, while our leaders continue to pamper the so called militants in the name of democracy". "According to the security report, these officers have vowed to do something if it is true that MEND killed twenty-nine soldiers", the source concluded.

chidi opara reports have not been able so far to unravel the nature of this planned clampdown. When approached for information on this, most of our security and Presidency contacts drew blank.

MEND have meanwhile insisted on the authenticity of its claim. In an online interaction with us, the spokesperson of the group, who goes by the name Jomo Gbomo, insisted that they killed twenty-nine soldiers in that attack and lost four of their fighters. He concluded with a threat that "the attacks will not stop".
Posted by PublicInformationProjects at 09:47