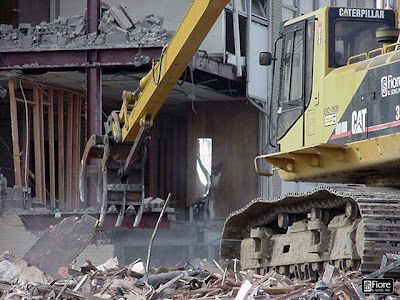 The good intentions of the Rivers state governor, Mr. Chibuike Rotimi Amaechi to rebuild the disorderly state capital city and thereby return it to its former garden city status may be misunderstood if those saddled with the task of demolishing structures that encroached on the major roads to make space for rebuilding the city are not called to order.

These people who were initially using marked government trucks, uniforms and identification cards, have now transformed into a militia, without proper identity and out to intimidate law abiding citizens, especially stanger elements, the only thing official arround them now are improperly dressed, ill-tempered, half drunk, rifle-wielding anti-riot policemen.

When chidi opara reports went round the city in August 2008, what was seen in most places visited, was outright vandalism. We saw buildings that were clearly not within the outlawed range from the roads(fifteen feet),being demolished, while some other buildings on same positions were spared. Our investigation revealed that most of the buildings demolished in this manner in the places visited belong to strangers, especially Igbos.

A store situated at the strategic Rumuola Junction for instance, belonging to one Toby Offor from Arochukwu in Abia State was demolished, while other stores on same position, whose owners we learnt are Rivers State indigenes were spared. Some car dealers of Igbo origin at same Rumuola junction had the burglary protectors of their car malls, which were clearly out of the outlawed range destroyed and some of them beaten up for daring to protest, while their counterparts on the opposite side of the road, whom we learnt are Rivers state indigenes were spared the ordeal.

This situation we discovered is fast lending credence to very loud whispers in the town that the demolition exercise is targeted at strangers. chidi opara reports have however, not seen any evidence of official conspiracy against strangers in this exercise so far. What we can now reveal is that some Peoples Democratic Party(PDP) stalwarts in the state are as usual raising a militia to use to intimidate opponents during the 2011 elections. What these stalwarts did according to a contact who is well versed in grassroots politics in the state, is to keep these boys busy with the demolition job. "You know the nature of these boys, they will always overdo things," The contact concluded.

Even though the Rivers state government apparatus like most others across the country operates a policy of secrecy which makes it near impossible to get information officially except when the governor's numerous hangers on deem it necesary, chidi opara reports can now authoritatively report that the governor is not officially aware of this development, but a low level governor's office contact summarized the situation to us in this way; "if you complain, will they allow the complaint to reach the governor and if it reaches him, will they allow him to act?"

E-mails sent to the governor's office and to the commissioner of information for comments have not been replied so far and from our past experiences, may never be replied.
Posted by PublicInformationProjects at 03:54