Frantic Efforts On To Pad Yar'Adua Up For Public Appearance 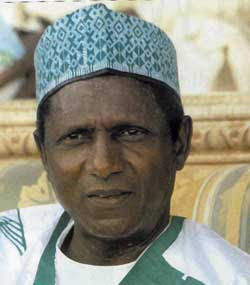 There have been frantic efforts to pad up the Nigerian President, Mr. Umaru Yar'Adua for an inevitable public appearance soon. The ailing President was bundled into the country from Saudi Arabia where he underwent the first phase of series of surgery to correct an organ ailment, by some top notchers of his ruling Peoples Democratic Party(PDP), some of his top security advisers and his kitchen cabinet, to stave off attempts to take over government by some middle level military officers.

chidi opara reports can now authoritatively report that the Nigerian President who was still recuperating in a private hospital in Saudi Arabia, had to travel home against the advice of his doctors, when it became imperative for security reasons that his presence is needed at the seat of government to forestall an unconstitutional change of government.

Despite initial objections by the President's two German doctors, the doctors on the intervention of some highly placed Saudi government officials, agreed to the President's return and decided to accompany him to Nigeria.

A Presidency contact who should know, informed chidi opara reports that "the doctors practically turned the Presidential jet into an hospital."

We also reliably gathered from another Presidency contact that when the President arrived Abuja at about 2.30 am on saturday 6th August 2008, "he was almost unconscious and had to be moved into an intensive care appartment, prepared two days earlier for this eventuality to avoid information leakage." The President is said to have returned to his official appartment by 6.00am Nigerian time on sunday.

"Right now, everything is being done to make the President fit enough to appear before the Nation soon", a top security contact in Abuja informed us.

We gathered also that there is an order from the office of the secreatary to the Federal Government to cabinet members and aides of the President to stay away from the Presidential villa for now. We are however, unable to independently confirm this development at this point in time.

chidi opara reports can now also report that two other German doctors flew into the country on sunday, August 7th to compliment the efforts of their colleagues. Low level Presidency contacts also informed us of the presence of marabouts in the villa, commissioned by the President's mother and his wife to offer sacrifices and prayers for his quick recovery.
Posted by PublicInformationProjects at 05:29