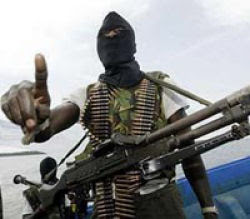 The MOVEMEMT FOR THE EMANCIPATION OF NIGER DELTA(MEND), the main militant group amongst the various armed groups claiming to fight for the emancipation of the oil rich region have expressed reservation over the Ministry of Niger Delta created by the Federal government in a gesture seen as aimed at placating the restive indegenes of the region. An online press release issued by MEND spokesperson, Jomo Gbomo this afternoon(11th september, 2008) reads:

The people of the region should receive this latest dish with apprehension and not allow the over five decades of starvation to rule our emotions as this is not the first time such "palatable" offers have been served to the region from the late 50's to date.

Creating a "Ministry" is not the coming of the much awaited messiah. Nigeria has in existence, ministries over 40 years old which has not positively impacted on the people. It will be yet another avenue for corruption and political favoritism.

Some examples of moribund ministries include Energy; with its epileptic power supply, Health; with hospitals that have turned to dispensing clinics such that even the president prefers to be treated in Saudi Arabia or Germany, Works and Transport; responsible for the untimely deaths and maiming of road users due to poorly maintained roads and bridges in spite of availability of funds, Education; with the elites loosing confidence that their children study in foreign tertiary institutions, Special Duties; with a minister that has been made redundant that he spends his time in office watching television. The list is endless.

MEND will know the government is sincere when it offers true federalism in all its ramifications which includes resource control. The unconditional release of all detained activists in its custody is another".

(Jomo Gbomo)
Posted by PublicInformationProjects at 07:35