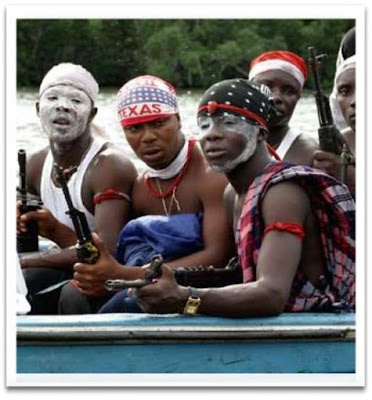 The Movement For The Emancipation Of Niger Delta(MEND) have today(14th September, 2008) declared war in the Niger Delta region, the War according to MEND's spokesperson, Jomo Gbomo is code named "Hurricane Barbarossa". Below is the text of the press release:

"Following a previous warning that any attack on our positions will be tantamount to a declaration of an oil war, the Movement for the Emancipation of the Niger Delta (MEND) has declared an oil war in response to the unprovoked aerial and marine attacks on a MEND position in Rivers state of Nigeria on September 13, 2008 by the armed forces of Nigeria.

About 0100 Hrs, today, September 14, 2008, Hurricane Barbarossa commenced with heavily armed fighters in hundreds of war boats filing out from different MEND bases across the Niger Delta in solidarity to carry out destructive and deadly attacks on the oil industry in Rivers state.

By dawn, destroyed oil flow stations, gun boats, burst pipelines, dead and injured soldiers trailed in the aftermath of the "hurricane". Some specific locations include the Soku Gas Plant, Chevron Platform at Kula, over 22 well armed soldiers sent as reinforcement were intercepted, killed and dispossessed of their weapons, a major crude trunk pipeline at Nembe creek was blown up at several points.

The operation will continue until the government of Nigeria appreciates that the solution to peace in the Niger Delta is justice, respect and dialogue. This military style bullying belongs to the past 50 years when the Niger Delta people responded only with their mouths, pens and placards.

All international oil and gas loading vessels entering the region are warned to drop anchor in the high sea or divert elsewhere until further notice. Failure to comply is taking a foolhardy risk of attack and destruction of the vessel.

Again, we are asking that oil companies evacuate their staff from their field facilities because the brief is not to capture hostages but to bring these structures to the ground".

In a related development, the Joint Taskforce on Security(JTF), a security apparatus created to manage the crisis in the oil rich Niger Delta region have described the recent claim by MEND that the security outfit attacked one of its locations in Rivers State as a mischievious propaganda.

"Inorder to checkmate the recurrent sea piracy and other criminal acts on our wateways, the Joint Taskforce operation flush out will maintain a regular marine patrol of notorious sea routes in Rivers State. It was during such patrol that militants opened fire on our patrol team which resulted to an exchange of fire, it was a minor exchange, no casualty on our side and the situation is under control. It happened at about 1035hrs today(saturday 13th september, 2008) at Elem Tombia. The Aircraft seen hovering arround was for survillance and reconnaisance only. Therefore, MEND's claim was just another mischievious propaganda to bastardize our collective effort at securitizing our water ways".

It will be recalled that on saturday, 13th september, 2008, MEND sent an online press release to chidi opara reports and some other news media organizations, claiming attacks by JTF on one of its locations in Rivers state, with helicopter gunships, Jet fighters and Naval boats. It also claimed lost of some of its fighters as well as casualties on the side of JTF and on some earlier rescued kidnapped oil company workers. The Niger Delta main militant group blamed the Governor of Rivers State, Mr. Chibuike Rotimi Amaechi for its current woes and concluded by warning oil majors and subs to leave the region within twenty-four hours, promising to commence an all out war.
Posted by PublicInformationProjects at 05:56