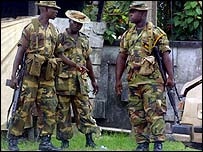 The recent closure of a private television channel and the arrest of some journalists working therein, following a news broadcast which claimed that the very sick Nigerian President, Mr. Umaru Yar'Adua was contemplating resignation, heralded the begining of a carefully planned crackdown on "unfriendly" news media organizations by security agencies, with the endorsement of the Presidency. This crackdown was hinted by chidi opara reports in a report titled "MEND: Defence Headquarters Panic, Plan Crackdown On News Media".

We can now report that a three faceted crackdown on "unfriendly" news media organizations have been planned by security agencies. This scheme is being co-ordinated by the office of the National Security Adviser(NSA).

Strategically placed security contacts informed chidi opara reports that one facet of the crackdown involves divulging seemingly sensitive but spurious information to "unfriendly" news media organizations known to relish scoops. These scoops, which usually end up being hoaxs, destroy the credibility of such organizations and provide ready excuse to close them down. The second facet according to our contacts, is to use governmental regulating organs to pressure "unfriendly" news media organizations in the broadcast sub-sector to abandon their anti-government postures or risk their licenses being revoked or not renewed. The third facet we learnt, involves blackmailing and if it becomes necessary, assasinating "unfriendly" news media executives whose organization cannot be shutdown easily, like internet news sites.

"If you know what they planned for one of you who publishes a popular internet news site, you will shiver", a security contact confided in one of our repoters.

It will be recalled that for some time now, the Yar'Adua Administration have not been happy with the way a section of the Nigerian news media have been reporting issues concerning the health of the President, as well as their coverage of the Niger Delta agitation.
Posted by PublicInformationProjects at 03:31