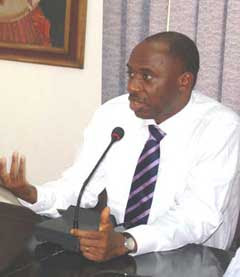 The government of the main oil producing state in Nigeria is also working with a major Nigerian commercial Bank, Zenith Bank Plc to undertake payroll audit of all Ministries and Departments to ascertain the exact statistics of the workforce in the employ of the State Government.

These revelations were made in Portharcourt recently by the Chief Executive Officer of the State, Governor Chibuike Rotimi Amaechi at a workshop on Economic Empowerment. The Governor who delievered the keynote address at the occasion also revealed that documentation plan for each Ministry, as well as the re-validation of certificates of ocupancy will soon commence.

The State Chief Executive Officer also used the occasion to highlight some of his developmental programmes, which he said included: (1)Building of new primary schools across the State. (2)Building of five health centres in each Local Government Area of the State. (3)Construction of a nineteen kilometre mono rail in Portharcourt on Public-Private Partnership(PPP) basis. (4)Establishment of four libraries in Portharcourt to encourage reading culture, and (5)sponsorship of thirty youths to Republic of Benin, who have already been trained on the Songhai farm model.

Governor Amaechi finally promised to provide a conducive environment for the people of the State to enhance themselves through the various empowerment programmes initiated by the State Government.

In a similar development, the Rivers State helmsman urged Moslems in the State to join hands with him in rebuilding and repositioning the State to meet the aspirations of a developing market economy.
The Governor who made this call in a message on the occasion of Id-El-Fitre celebrattions advised residents and indigenes of Rivers State to be committed to the task of developing the State. He affirmed that his Administration is doing a lot to transform the State and solicited for the support and understanding of all stakeholders.
Posted by PublicInformationProjects at 04:49 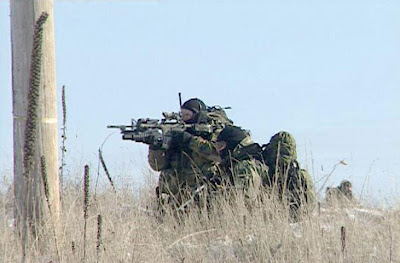 The Joint Taskforce on security(JTF) in the Niger Delta region have taken the oil war declared recently by the Movement For The Emancipation Of Niger Delta(MEND) to a new height.

MEND had declared an all out war it code named "Hurricane Barbarossa" whose main aim was to sabotage oil and gas facilities in the creeks of the oil rich region following what it claimed was unprovoked multi-faceted attacks on one of its camps in Rivers State by the JTF. The adhoc security apparatus then debunked the claim, insisting that one of its marine units was on routine patrol on the waterways, when it was attacked by a MEND unit and had to respond.

The oil war which lasted barely one week resulted into casulties on both sides, with each side exaggerating the other side's casualties and downplaying its own. The main casualties were however, oil and gas platforms, which were considerably destroyed, resulting into a considerable reduction in production outputs, which in turn resulted into reduction in revenue earning for the Nigerian Nation whose economic mainstay is revenue from oil and gas. MEND subsequently declared a unilateral ceasefire.

This development roused the Nigerian Presidency who have hitherto treated the issue of militancy in the Niger Delta region as a minor internal problem, into action, resulting into an order to the Defence Headquarters "to find a lasting military solution to the problem". This order to a lay person may not mean much, but top military contacts whom chidi opara reports spoke to, said that the order is equivalent to a declaration of war.

Our investigations revealed that when the new Chief of Defence Staff, Air Marshall Paul Dike visited the restive region recently, what he saw moved him to order "immediate and complete routing of the militants", a mandate that is said to be broader than the former rule of engagement on which JTF was operating. JTF have however, denied this, but strategically placed contacts at the Defence headquarters insist that the adhoc security body's rule of engagement have been expanded.

"They were having upper hand because the former Chief of Defence who is their brother refused to give us order and weapons to clear them, now that their brother is no longer there, let us see how they can out gun us", a JTF unit commander boasted to one of our reporters.

We learnt authoritatively that there is presently, massive deployment of troops and equipments as well as continous bombardment of militants' camps especially in Rivers State. The heat we further learnt have resulted in hurried movements of militants to relatively calm places like Ondo and Cross River States.
Posted by PublicInformationProjects at 03:54