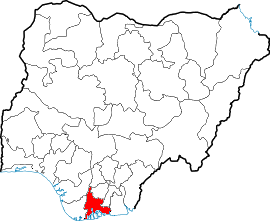 The political warfare which have been fought on many fronts since the Rivers State governor, Mr. Chibuike Rotimi Amaechi was declared the duely elected governor of the oil rich state by the Supreme court of Nigeria last year(2007) have shifted to the Economic And Financial Crimes Commission(EFCC) and the news media.

Ever since the Supreme court gave the controversial verdict which many observers described as a judicial coup, the political configuration in the state have been divided into two major camps. While the governor leads one camp based in Portharcourt, a former governor of the state, Dr. Peter Odili, known to be the incumbent governor's political godfather is leading the other camp based in Abuja.

What sparked off the current battle was an alleged move by the Abuja group to use the EFCC against the portharcourt group and a news report published by some newspapers and a popular news website, alleging that one of the close aides of the Governor, who is currently undergoing interrogation at EFCC had opened an account with a fictitious name in one of the banks in portharcourt, through which money belonging to the state government is allegedly being transfered into the governor's private purse. The report continued that when the account was discovered by the EFCC, a notice was given to the bank for its freezing. The report further alleged that the governor's aide moved quickly to convert it to a government account after withdrawing a hefty sum.

Investigations in Portharcourt by chidi opara reports revealed that when the news broke, the Portharcourt based group who are already trying to make in roads into EFCC wih the aim of having its own contacts therein, concluded that this is another weapon of its opponents. It therefore intensified efforts to penetrate the anti-corruption commission. We learnt that the Portharcourt group have in the meantime drafted its own news media attackers into the new battle grounds. An equally popular news website which the governor's group patonizes have already published what observers believed was a hatchet job.

Rivers state is reputed to be a major oil and gas producing state in Nigeria. This position also confers on it the position of the richest state in the country. A cross section of analysts who have been following keenly, the political bullfighting in the state, whom chidi opara reports spoke to, posited that there are no altrustic motives behind these fights. "They are only aiming at the commonwealth of the people", a lecturer in the Faculty of Humanites at the University of Portharcourt, who did not want his name published told one of our reporters yesterday(6th october,2008)at the University's senior staff club.

As the drumbeat of this battle continues to sound, the words of a female civil servant whom our reporter met at the Rivers State secreatariat complex, continues to echo. "Everybody seems to have forgotten us the common people" she complained.
Posted by PublicInformationProjects at 05:29