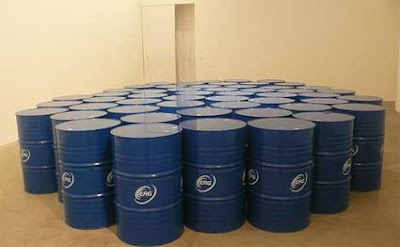 Blood oil, a term recently promoted by the Nigerian President as a variant of the infamous blood diamond still thrives in Nigeria, despite contrary claims by security agencies.

Like blood diamond which has been fuelling large scale armed conflicts in some West African countries like Liberia and Sierra Leone, blood oil has been identified as the main sustaining factor of the Niger Delta armed conflict, which has metamorphosed over the years from minor to major armed struggle.

When this minor conflict degenerated into a major one, the then Nigerian President, rtd. general Olusegun Obasanjo inaugurated an adhoc security agency named Joint Taskforce On Security(JTF), comprising the Army. Navy, Airforce, Police and State Security Service. Its mandate was and still is to manage the security situation in the oil rich region.

The inauguration of JTF which many thought would atleast minimized the conflict, rather maximized it. According to findings by chidi opara reports, JTF leadership rather than strategizing to stop all forms of crude oil thefts as a first step towards stopping the conflict, organizes its own rackets and in some cases, collaborate with the militants in these rackets.

A chidi opara reports' contact in the creeks revealed to us that "from time to time, JTF arrests barges which they show to you journalists, but they wont show you the big vessels that illegally load atleast four thousand metric tons of crude oil each, on the high sea, almost on daily basis, settles JTF and disappear". "Although the vessel owners", the contact continued, "also pay the militants and we, the kelebes". Kelebe is an alias for informers.

Checks also revealed that Nigerian National Petroleum Corporation(NNPC) key officials are also neck deep into crude oil theft. The big vessels used for the rackets are not registered with the Corporation as required by law, yet they get loaded with forcados thick crude oil by NNPC engineers, pay seven naira per barrel to JTF as security fees and sail. NNPC topshots usually collect their shares of these rackets in advance through offshore bank accounts.

In the words of a JTF officer, "nobody kills a cash cow". The Niger Delta conflict have indeed become a cash cow for the JTF, the militants and the big time crude oil thieves.
Posted by PublicInformationProjects at 05:00