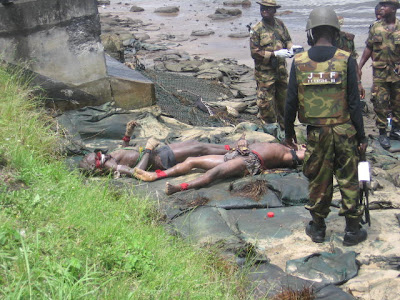 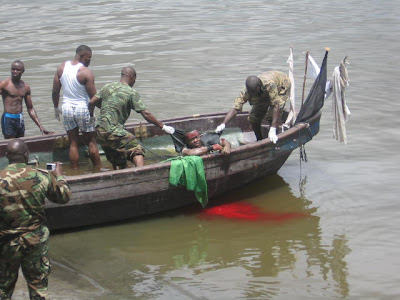 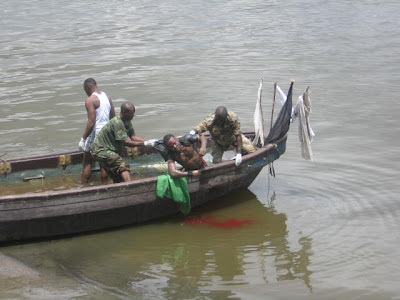 Blood oil like its infamous cousin, Blood diamond, evokes memories and images of blood letting as shown above. These images were captured recently in the Niger Delta region of Nigeria.
Posted by PublicInformationProjects at 06:50 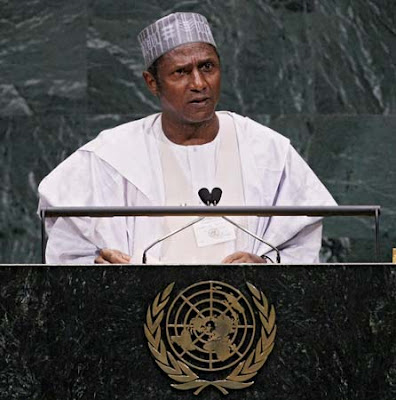 Some hours after chidi opara reports published a report revealing the real reason why the Nigerian news blogger, Mr. Jonathan Elendu was arrested, the State Security Service(SSS), came out to announce that he was in their custody and a day after, offered him a freedom proposal. The SSS late on friday, 24th october 2008, announced officially that the detained news blogger was initially detained on issues concerning national security, which has been narrowed down to "sedition", thereby confirming our report, titled "Real Reason Why Nigerian Online News Publisher Was Arrested" which was published at about 0800hrs.(local time) on same friday and in which we revealed that the news blogger was arrested in connection with materials he was suspected to have obtained which could embarrass the government if published. Prior to our report, the news was that Mr. Elendu was arrested on suspicion of working for another Nigerian news blog.

Latest inside information available to us has it that the accuracy of our report unsettled top security leadership in Abuja, prompting the SSS announcement and the freedom offer. We have also been informed that presently, there is nothing concrete against Mr. Elendu to warrant prosecution, yet the Nigerian government intends to hang on to the sedition allegation, while looking for substantial evidences to arraign him in court. "There is a very strong suspicion that he has materials that can embarrass the government if published", one of our SSS contacts insisted. The nature and volume of these "materials", we learnt, is not known to the government. "Whatever happens, we are bent on finding out and retrieving whatever he must have gathered", our contact boasted.

chidi opara reports now know that by about noon on saturday, 25th october, 2008, Mr. Elendu, who is now being detained at an Economic And Financial Crimes Commission(EFCC) guest house at the Asokoro area of Abuja, was given a written freedom proposal, which amongst other things include (1) that he would reveal and turn over to the interrogating team, all materials capable of embarrassing the government in his custody. (2)Severance of any professional relationships with any local and/or foreign news media. (3)A committment to use his news blog to advance government viewpoints and (4) a private apology to the Nigerian President. We leant that on receipt of the proposal, Mr. Elendu asked for time to study it. "It is likely that he will be arraigned if he fails to embrace this freedom proposal" our contact further volunteered.

Meanwhile, a top female journalist of Igbo origin, who is known to be close to the Presidency and two other men based in USA, whose identities we have not been able to unravel so far are presently doing the Abuja power circuits, lobbying for the release of the detained Nigerian news blogger.
Posted by PublicInformationProjects at 05:40