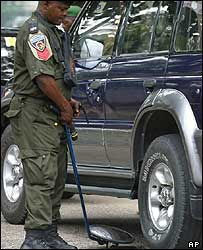 The Nigerian Government under the leadership of Mr. Umaru Yar'Adua, who was declared President following an election which local and international monitors tagged fraudulent, is presently armtwisting another United States Of America(USA)based Nigerian news Blogger, Mr. Emmanuel Emeke Asiwe. Mr. Asiwe is the Publisher/Editor-In-Chief of Huhuonline.com.

Mr. Asiwe who was arrested recently on arrival at the Murtala Muhammed International Airport in Lagos and flown to Abuja is being interrogated, according to information available to chidi opara reports, "on issues of national security". "Issues of national security" have recently become an excuse with which the Nigerian establishment uses to harass journalists, especially the online segment.

A network member of chidi opara reports in Abuja, reported that the State Security Service(SSS) in their current operations method, have nothing against the online publisher "to warrant even an arrest".

The method now, according to a Senior security contact is to arrest a target, accuse him/her of being a security risk, seize his/her travel documents, threaten to arraign him/her in court for sedition and subsequently ask him/her to apologies to the President and make a commitment not to publisher further "subversive materials" against the government. The second phase, according to our information, is to release the target and his/her travel papers to a prominent Nigerian resident in Nigeria and use the person to constantly pressure the target not to be critical of government policies. "Nothing suggests that the man will not go through these processes" our security contact volunteered.

Mr. Asiwe's Huhuonline.com is a rightwing news blog. chidi opara reports however, learnt that the clampdown on news media ordered by the Nigerian President made no exception to ideological leaning. Presidency hawks, we learnt have been able to convince Mr. Yar'Adua that news blogs like Huhuonline.com are perching dangerously on the ideological fence with the likelyhood of falling to the leftwing side of the divide.

Mr. Asiwe is the second news blogger so far taken into custody without charges by the Nigerian government in october(2008).

Some men suspected to be security agents were recently making enquiries at our Publisher's hometown regarding his location.
Posted by PublicInformationProjects at 11:02