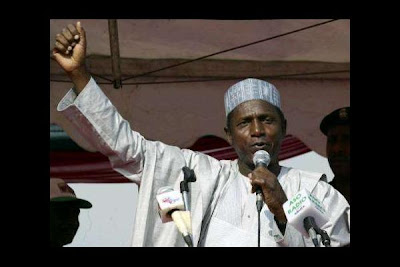 The new list of ministerial nominees which is supposed to have been with the Senate, Nigeria's upper legislative chamber, but which was first sent to the State Security Service(SSS) for security screening and clearance before submission to the legislators keeps changing.

The changes, Presidency contacts informed chidi opara reports is not unconnected with the tendency of many Nigerian leaders to shady lifestyles. The Nigerian President Mr. Umaru Yar'Adua recently dropped twenty of his Ministers in a widely expected cabinet reshuffle.

Inside information available to us has it that the Presidency compiled two lists, a main list and a supplementary one, with inputs from state governors, former heads of state, especially the immediate past president, rtd. general Olusegun Obasanjo and other stakeholders, the exception being rtd. General Muhammadu Buhari, the presidential candidate of All Nigeria Peoples' Party(ANPP) in the 2007 presidential election, who is still challenging the President's election at the Supreme court.

Checks in top level security circles revealed that four of the ministerial nominees could not scale through the security huddle and had to be replaced. chidi opara reports was reliably informed that two nominees from the south west, one from the south east and another one from the north central zone(names withheld for legal reasons) have so far failed the security screening.

"The exercise is progressing, we are being very diligent", a highly placed security contact in Abuja revealed to us.

Mr. Yar'Adua on his return from Saudi Arabia recently where he underwent a minor organ surgery, had hinted of a cabinet reshuffle. We learnt that as soon as the hint was dropped, lobbyists literally invaded the Presidency with resumes. Our inside information indicated that these lobbyists concentrated mainly on Ministries considered as "very lucrative", this includes the newly created Ministry of Niger Delta Affairs.

These lobbyists were so powerful that "at a point there was fear in the Presidency that a final list cannot be compiled without offending some of these interests" a Peoples Democratic Party(PDP) chieftain informed one of our network members in Lagos on friday(31st october 2008). "But somehow Mr. President managed to scale the huddle", the PDP chieftain concluded.

"It is expected that the security screening will end soon, The final list will be submitted to the Senate as soon as possible" a middle level Presidency staffer who pleaded not to be named whispered to chidi opara reports.
Posted by PublicInformationProjects at 04:36