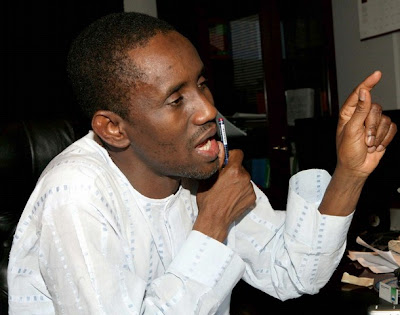 The former chairman of Nigeria's Economic And Financial Crimes Commission(EFCC), Mr. Nuhu Ribadu have stirred up disquiet in government circles with a law suit instituted against the Police Service Commission(PSC), a Government agency responsible for the recruitment, promotion, e.t.c of the senior ranks cadre of the Nigerian Police force(NPF), challenging his demotion in rank.

The PSC recently demoted Mr. Ribadu from the rank of Assistant Inspector-general(AIG) to the rank of Deputy Commissioner(DC), alleging irregularity in his accelerated promotion by the immediate past Administration of rtd. General Olusegun Obasanjo. This action of the PSC was believed to be part of a scheme to force Mr. Ribadu out of the Police by some powerful persons whom he was believed to have offended while performing his duty as EFCC chairman.

Nuhu Ribadu's tenure as EFCC's Chief Executive Officer is widely regarded as a period of increased activities in Nigeria's anti corruption crusade. The Commission under him investigated and prosecuted some persons hitherto considered "sacred cows", including a former Inspector-general of Police, Mr. Tafa Balogun and some ex governors.

Earlier this year when Ribadu was nominated to attend a course at the Nigerian Institute Of Policy And Strategic Studies(NIPSS), observers saw it as a way of slowing down the anti corruption crusade which Mr. Ribadu pursued with vigour by removing him from EFCC. The subsequent action of demoting him, seemed to give credence to this belief.

A telephone interaction between chidi opara reports and a contact very close to Ribadu revealed that apart from using the law suit to draw attention to his plight in the Police force, the former anti corruption commission chief also intend to use it to draw attention to "the double standards in this Administration", the contact informed us.

chidi opara reports have independently confirmed that several attempts are being made to pressure Mr. Ribadu to drop his current line of action through some influential persons considered close to him, including former President Olusegun Obasanjo. These efforts we can report have so far not yielded any positive result. "You know very well that Nuhu is a very stubborn man". our contact further informed.

We gathered also that there was a high level scheme to withdraw Mr. Ribadu from the course before his graduation and retire him as a Deputy Commissioner, "but somehow, he got the information and the only option was to go to court", our contact further volunteered.

Our ever alert network members who are keenly monitoring the situation are of the opinion that the law suit has the potential to expose lots of uncomfortable facts about this Administration and its agencies like PSC.
Posted by PublicInformationProjects at 02:05