Another Oil War Looms In Nigeria 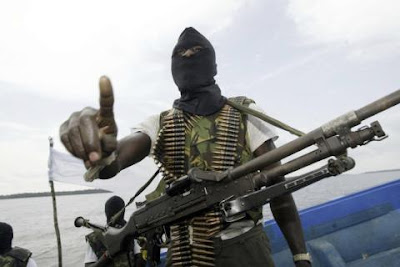 There appears to be an imminient oil war between the Movement For The Emancipation Of Niger Delta(MEND), which claims it is fighting to stop the long years of neglect of the oil and gas bearing region by successive Administrations, and the Joint Taskforce on security(JTF), a security taskforce created to manage the unique security imperatives in the oil and gas rich region. A previous oil war had been fought with lots of casualities on both sides, as well as serious damages to oil and gas production and loading facilities operated by the oil majors.

The first sign that another oil war is in the making was when the spokesperson of MEND, who goes by the pseudonym Jomo Gbomo in an online news release accused the JTF of planning attacks on MEND's locations on the excuse that one of its(MEND's) commanders named Boyloaf killed some security operatives. Even though some network members of chidi opara reports had noticed upbeat preparations in JTF camps in Portharcourt, Yenagoa and Warri, we had initially thought that these activities were only meant to create fear in the minds of the Niger Delta militants.

We can now report that that the JTF have completed preparations to launch another major attack on MEND's locations in the creeks. This position was partly confirmed when the JTF spokesman in Rivers State, Lt. Col. Musa Sagir recently in Portharcourt issued a warning to MEND to desist from certain actions or risk JTF attack. MEND also threatened to launch what it called "Hurricane Obama" if attacked.

Checks by chidi opara reports revealed that MEND is not in a very good fighting form presently. We learnt that immediately after the last oil war which MEND code named "Hurricane Barbarossa", the JTF, surprised that MEND could muster such level of fighting strength, continued to bombard its camps, even though the militant group had declared a unilateral ceasefire. We also gathered that these sustained attacks depleted the militant group's human and material resources consderably, resulting in MEND's current state of near comatose. "We have to sustain these attacks to completely clean up the creeks" a JTF officer told chidi opara reports.

"Anyhow the thing be, we must fight to survive", one of chidi opara reports' contacts in MEND volunteered on telephone in a not so fluent English. Further checks however, revealed that even though JTF may at the moment have advantage over MEND in men and materials, the morale of the militants who believe that they are freedom fighters is very high. "We are waiting for them here", our MEND contact concluded.

Observers are of the opinion that as it stands now, only a move towards political solution by major stakeholders in the region, which we learnt is in the offing can avert another oil war.
Posted by PublicInformationProjects at 00:48