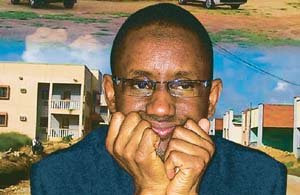 A strategically placed contact in the Nigerian Presidency has informed chidi opara reports that the humiliation of former chairman of Ecomonic And Financial Crimes Commission(EFCC), Mr. Nuhu Ribadu during the graduation ceremony of the elite Nigerian Institute Of Policy And Strategic Studies(NIPSS) on November 22, 2008, received the blessings of British And American Governments.

chidi opara reports was authoritatively informed that at about the time the Attorney-general and Minister of Justice of Nigeria, Mr. Michael Aondoakaa was at NIPSS(evening of 21/11/2008) to convey to the management of the institute, "order from the Presidency regarding Nuhu Ribadu's graduation", two high level officials of Nigeria's foreign Ministry were at the embassies of the United Kingdom(UK) and United States Of America(USA) respectively, to brief the two Nations of the impending action. At about 2035hrs(Nigerian time), our contact revealed, "the two World powers have been briefed and their consents secured".

Mr. Ribadu was yesterday stopped from participating in the graduation ceremony of NIPSS by security operatives acting on "orders from above". The former EFCC chairman was subsequently arrested in the presence of his immediate family and invitees and taken to unknown location, but unconfirmed information reaching chidi opara reports indicated that Ribadu is under house arrest in Ebonyi State.

The youthful looking tough former EFCC chairman was earlier in the year sent on an executive course at NIPSS, an action many believed was a ploy to remove him from the anti-corruption commission, so as to protect some former state governors whom EFCC under Ribadu investigated and was prosecuting for corrupt enrichment while in office. These ex-governors were believed to have contributed immensely from the slush funds to the President's campaign fund during the 2007 Presidential election.

The current disquiet was stirred when Mr. Ribadu was demoted from the rank of Assistant Inspector-general of Police(Aig) to Deputy commissioner(DC). The former EFCC helmsman consequently went to court to challenge his demotion. The rank of Deputy commissioner of Police makes him ineligible to participate in the course at NIPSS.

chidi opara reports can now reveal that elaborate schemes have been laid out to humiliate Mr. Ribadu and to fraustrte every of his moves to restore himself to his former rank. We also learnt that Western Nations, especially UK and USA, whose economies depend largely on inflow of slush funds from developing Nations like Nigeria, to stay afloat, especially in this era of global economic recession are co-operating with the Nigerian government in this regard as a way of slowing down anti-corruption campaigns.
Posted by PublicInformationProjects at 05:47