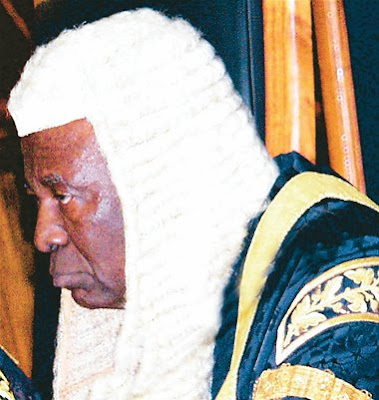 The situation regarding the Nigerian Presidential Election Appeal, whose ruling is slated for today by the Supreme Court is still hazy.

The situation being closely monitored by chidi opara reports, indicated that at the close of work yesterday, none of the Judges on the panel have submitted any written opinions on the matter as advised by the head of the Court, the Chief Justice, to the office of the Chief Justice. These written submissions will eventually form the basis of any consensus ruling on the matter. The Judges, we learnt on good authority, suddenly resolved to submit their written opinions, "at the last minute".

This last minute development, chidi opara reports gathered from competent Presidency contacts, sent the Presidency into panic, prompting the President to personally contact two former heads of Government, rtd. General Yakubu Gowon and Mr. Ernest Shonekan to "put words across to the Chief Justice in the interest of peace and national security".

Contacts close to Gowon and Shonekan informed chidi opara reports that both former heads of Government, spent hours yesterday, respectively working the telephones, preaching the often repeated peace and national security to the Chief Justice, in the consideration of today's ruling. We were however, unable to ascertain the impact of these conversations at the time of posting this report.

In a similar development, chidi opara reports' network members in major northern cities have reported a step up of security. We learnt of an intelligence report hinting at a possible violent reaction by elements sympathetic to the Presidential ambition of rtd. General Buhari, the Presidential candidate of All Nigeria Peoples' Party(ANPP) in the election under dispute. Buhari is known to be popular among the common people(Talakawas).

Unconfirmed reports reaching us also hint at a compromise by the Presidential candidate of the Action Congress(AC) in that election, Mr. Atiku Abubarkar. The details of the compromise was however, not stated. What we can confirm is that the President's mother, during the Sallah holidays had a lenghty telephone conversation with Mr. Abubarkar in which she advised the former Vice-president to "accept whatever is the outcome of the case as the will of Allah". Abubarkar is a family friend and business associate of the Yar'Aduas.

It will be noted that when the Independent National Electoral Commission(INEC), declared Mr. Umaru Yar'Adua, the Presidential candidate of the Peoples' Democratic Party(PDP), as the winner of the 2007 Presidential election, the duo of Abubarkar and Buhari respectively went to court to canvass for the nullification of the result.

The Presidential Election Petition Tribunal, which is the equivalent of the Court of Appeal, however upheld the result, prompting Abubarkar and Buhari to file appeals at the Supreme court.
Posted by PublicInformationProjects at 00:35