Nuhu Ribadu; What Next? 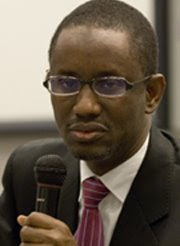 Indications are that if representations being made to some influential personalities in northern Nigeria, notably, the Lamido of Adamawa and the Sultan of Sokoto by some friends of Mr. Nuhu Ribadu, the former chairman of the Economic And Financial Crimes Commission(EFCC), who was recently dismissed from the Nigerian Police Force by the Police Service Commission(PSC), to intervene in the face-off between the erstwhile anti-corruption chief and the Administration of Mr. Umaru Yar'Adua, fail to elicitate favourable response, the former anti-graft commission chieftain may be in for more victimizations and humiliations. Nuhu Ribadu is a northerner from Adamawa State.

Investigations by chidi opara reports revealed that there is the likelihood that Ribadu may soon be arrested by EFCC for failure to properly hand over some of the commission's properties in his custody to his immediate successor. A handover memo signed by the former EFCC chairman, which chidi opara reports sighted, however, indicated a thorough handover, but we cannot at this time independently confirm the authenticity of the memo.

We also discovered that some persons whom the EFCC under Ribadu prosecuted and got convicted are fine tunning, at the prompting of some powerful politicians, whom Ribadu stepped on their toes, series of petitions, alleging that some of their properties seized by the commission under Ribadu were not properly accounted for. "As soon as we receive any of these petitions, we will move in immediately", an EFCC top level contact informed chidi opara reports.

We further discovered that the main reason for the persecution of Mr. Ribadu is the fact that the Nigerian Presidency was made to believe that some vital components of some sensitive case files like that of some former state governors, were duplicated and taken away by the erstwhile EFCC chairman. It is feared that if by any arrangement, these ex-governors were discharged and acquitted, that Ribadu will release such sensitive information to the news media, especially, the leftwing news blogs, who are usually based outside Nigeria, one of which he has personal relationship with. "As soon as he pledges absolute loyalty and promises to desist from leaking sensitive official information to those people, his troubles will be over", a senior security contact told a chidi opara reports network member recently in Abuja.

We are aware that Mr. Nuhu Ribadu's friends are all over major northern Nigerian cities now, lobbying influential personalities to save the former EFCC chairman from further victimizations and humiliations. We do not however, know at the time of posting this report whether this lobby has Ribadu's blessing or not.
Posted by PublicInformationProjects at 03:33