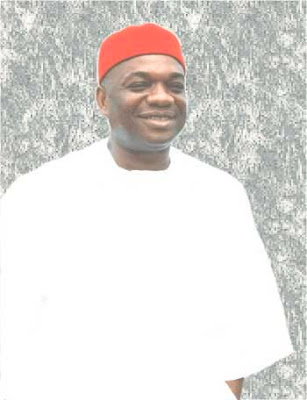 A network member of chidi opara reports who was at the event, reported that while the ceremony was on, there was a marathon closed door meeting between Mr. Kalu and some chieftains of the Peoples Democratic Party(PDP), who came to explore ways of bringing the former Abia State governor, who was a founding member of PDP back to the party. A sizeable percentage of these PDP chieftains, according to this network member, are members of the Ibrahim Badamasi Babangida(IBB) caucus within PDP.

chidi opara reports also learnt from a knowledgeable contact within the IBB caucus that for sometime now, bringing Orji Uzor Kalu back to PDP has been on the card within the IBB political machine, "because it has been discovered that an Orji Kalu as a vice-presidential candidate will be more politically formidable than a Peter Odili", the IBB insider revealed to us.

The IBB-Odili ticket has been on the burner for sometime now. A chidi opara reports independent investigation however revealed that a greater percentage of members of the IBB political think tank believe that IBB should pair with Kalu, an Igbo from south-east in the 2011 Presidential election, if he(IBB)hopes to make meaningful impact, moreso, according to the IBB think tank, now that it has been discovered that there will most likely emerge another Yar'Adua-Jonathan ticket. The IBB think tank we learnt further are of the opinion that Peter Odili from a minority sub-ethnic group in the south-south will not be able to counter the influence of Goodluck Jonathan, a siting Vice-president from the Ijaw stock, a majority ethnic nationality in the south-south. The Igbos are believed to be the third largest ethnic nationality in Nigeria.

The only problem so far in the bid to get Kalu back to PDP, we learnt from an Orji Uzor Kalu insider is that the Abia State political chieftain is "somehow apprehensive that the President may use EFCC against him, if he accept the IBB carrot and return to PDP". Mr. Kalu whose Party is participating in Yar'Adua's "government of national unity", is currently being prosecuted for corruption while in government by the EFCC.
Posted by PublicInformationProjects at 05:38