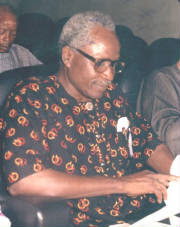 Information reaching chidi opara reports indicated that a Nigerian literary Icon, rtd. Captain Elechi Amadi may have been kidnapped by yet unknown gun men. Details of the situation is still hazy, but chidi opara reports can reveal that activities inside the Rivers State government house and inside security circles in the State capital seem to give credence to this information.

The Association of Nigerian Authors(ANA), Rivers state chapter, chidi opara reports learnt is meeting this afternoon in an emergency meeting, whose Agendum is likely to be the group's response to the kidnapp.

Rtd. Captain Elechi Amadi, who is better known as a novelist and a former President of the Ogbakor Ikwerre convention, the umbrella cultural organization of the Ikwerre ethnic nationality, is a founding member of ANA and currently the chairman of the Rivers State scholarship board.

A contact close to the literary icon told chidi opara reports in Portharcourt that the renowned novelist lives an apolitical and simple live, "one wonders why anybody will want to kidnap such a man if it is true?", our contact querried.
Posted by PublicInformationProjects at 03:35