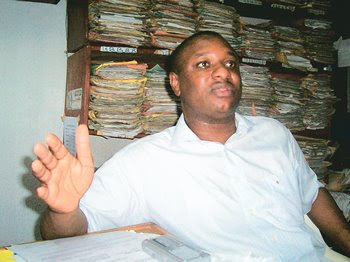 The war blew open when Mr. Sowore made open a letter he wrote to Mr. Keyamo, demanding that the radical lawyer speak up on the Nuhu Ribadu saga. Sowore in his letter made a veiled reference to the radical lawyer compromising his anti-corruption credential because of legal retainerships by some government agencies. Mr. Keyamo in his response, denied Mr. Sowore's accusation and made allusions to Mr. Sowore falsifying his medical records to enable him travel out of Nigeria some years ago, amongst other accusations.

It is not known at the time of posting this report, what Mr. Sowore's response to these accusations will be, but a contact close to the online news publisher, informed chidi opara reports that "the Omoyele I know will not let these serious accusations lying low, he will surely respond". Another contact close to Mr. Keyamo told us in Lagos that "before Festus makes such accusations, he has substantial evidences to back them up".

Checks by chidi opara reports revealed that for some time now, there has been silent warfare in the human rights and anti-corruption community in Nigeria, due to what a contact within the community termed "largess from the Presidency".

The Nigerian Presidency, chidi opara reports learnt authoritatively, at the height of severe criticisms from the human rights and anti-corruption community, decided to apply "the carrot formula", in this formula, according to our contact, some vocal activists were bribed with governmental patronages like appointments into government agencies, land allocations in the Nation's capital territory and other patronages like legal retainerships for Lawyer activists and adverts patronages for Journalist activists. "These patronages were designed not to go round, so that those who are not favoured will expose the favoured ones", a well placed presidency contact told us.

chidi opara reports further discovered that this situation is pleasing to the Presidency because of the respite from attacks on its policies from the community, which the current intra-community warfare has given it.
Posted by PublicInformationProjects at 10:08