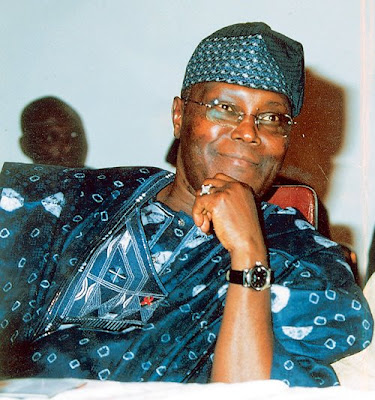 The immediate past Nigerian Vice-president and Presidential candidate of the Action Congress Party(AC) in the April 2007 Presidential election, Mr. Abubakar Atiku is likely to contest the 2011 Presidential election on the platform of the ruling Peoples' Democratic Party(PDP), with the Governor of Osun State, rtd. Brigadier-general olagunsoye Oyinlola as running mate, chidi opara reports learnt authoritatively.

Abubakar Atiku, a foundation member of PDP, left the Party as a result of serious political misunderstanding between him and the then President, rtd. General Olusegun Obasanjo.

Mr. Atiku's political group, according to one of our contacts within the Obasanjo political group, initiated several secret meetings last year, all aimed at preparing grounds for a reconciliatory meeting between Atiku and Obasanjo, because according to this contact, "they realised that they will need Obasanjo with his national and International clouts in 2011".

chidi opara reports learnt further that the Obasanjo group met and eventually agreed to their principal meeting and reconciling with the former Vice-president on the conditions that Atiku will return to PDP and will use his political experience and wealth to help the group, "retieve the Party from the tight grip of Umaru Yar'Adua". The former Vice-president is reported to be a very wealthy person. Atiku is also to pick the two term Governor of Osun State, an avowed Obasanjo loyalist, as his Vice-presidential candidate come 2011. The immediate past Vice-president, chidi opara reports learnt further, "pleaded for time to sort things out with his Party and larger political network.

It will be noted that Atiku, in company of Oyinlola and others, recently paid Obasanjo a visit at his hilltop Mansion in Abeokuta, capital of Ogun State. The meeting, our investigations revealed is the first in the series of such meetings with the aim of building a new political understanding between the former Vice-president and his erstwhile boss.
Posted by PublicInformationProjects at 01:15