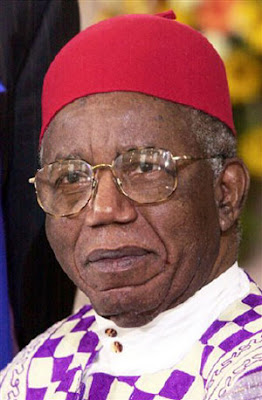 Prominent Nigerian Politicians who have been at political loggerheads for over two years now, Dr. Chris Ngige, whose governorship tenure was terminated midway by the Anambra State Governorship and House of Assembly Election Petitions Tribunal, on the ground that he was not duely elected, and Mr. Peter Obi, the incumbent Governor of the State, who filed and benefited from the petition that removed Dr. Ngige, reconciled their differences at the 2009 annual Ahiajoku Lecture in Owerri, capital city of Imo State, on the 23rd of January, 2009. Dr. Ngige also contested the April 2007 Governorship election on the platform of the Action Congress Party(AC).

Mr. Obi, who came into the venue at about 12.45pm, according to a chidi opara reports' network member, who was at the lecture, after greeting the cream of personalities present, which included rtd. Major-general Ike Nwachukwu, Professors Pat Utomi, ABC Nwosu, Dora Akunyili and some prominent traditional rulers, went straight to greet Dr. Ngige, who in turn reciprocated the gesture, culminating in both hugging themselves and pledging to forget their political differences for the sake of Anambra State in particular and Nigeria in general, to the applause of the forum.

Anambra State is one of the politically strategic states in Nigeria. Its strategic position derived from the fact that it is the home state of most prominent Nigerian Politicians of Igbo extraction. Observers believe that unresoved political differences in a politically strategic State like Anambra would potend grave consequences on the nascent Nigerian democracy. It is also believed that the recociliation of the two prominent political figures will eventually make way for the reconciliation of the various contending political forces in the State in particular and the Nation in general.

The annual Ahiajoku Lecture, chidi opara reports gathered was instituted in 1979 by the Administration of the late Dr. Sam Mbakwe, then, the Governor of Imo State, "to provide a forum for men and women in all human endervours to gather and showcase the contributions of Igbos to world civilization".
Posted by PublicInformationProjects at 02:56