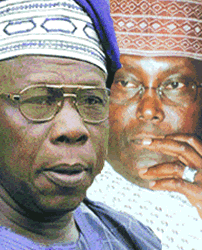 chidi opara reports' checks revealed that the reaction of the President, Mr. Umaru Yar'Adua to the Obasanjo-Atiku rapprochement, according to a well placed Presidency insider, was to put a call across, which he rarely does, to former President Olusegun Obasanjo, reminding him of the need to help strengthen the present Administration, which according to the President, the immediate past President was instrumental to lts installation. "The discussion was a long one and I think the President was eventually assured of assistance", our Presidency insider volunteered.

"The call was expected, when it came, our leader made the best of it. I hope those small boys running arround the President have now realised who is a better politician", a well placed Obasanjo insider informed chidi opara reports in Lagos.

We also discovered that the Yar'Adua political camp is under strict instruction not to react negetively to this development, but to find ways of using it to the benefit of the Administration.

This scenerio is however, different from what obtains in the Ibori-Tinubu-Saraki political coalition. Although attempts by our network members to infiltrate this group, having lost our contact, have not been successful so far, information however has it that that there is apprehension within the group. "Their fear is that the emerging Obasanjo-Atiku group will deprive them of the influence they have been exacting on Mr. President", a contact who claimed to be following the activities of the group informed us.

It will be noted that the Obasanjo-Atiku rapprochement was strengthened on Saturday, 24TH january, 2009 in Katsina, when the duo appeared together at the wedding ceremony of the President's daughter.
Posted by PublicInformationProjects at 10:30