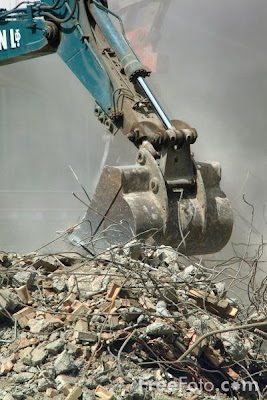 The cold war between Penticostal churches under the aegis of Penticostal Fellowship Of Nigeria(PFN) and churches founded on indigenious philosophy like the Brotherhood Of The Cross And Stars, also known as Olumba Olumba Obu(OOO) and others, claimed its first victim this morning when the GRA phase111 Bethel of OOO was reduced to rubbles by a demolition squard suspected to have been deployed by the Rivers State Ministry Of Urban Development working in concert with the family of late Melford Okilo, a former governor of the State who donated the Bethel to the church.

The demolition, which took members of the church by surprise, chidi opara reports learnt, started at about 7.00 am and was still going on at the time of posting this report.

We have not been able so far to ascertain the reason for the demolition of the Bethel which we learnt have been on the location for more than ten years, as no official of the Rivers State government or the church was available for comments. A member of the church who gave his name as Gilbert however, told a network member of chidi opara reports who was at the scene that, "I am surprised by this action of the Rivers State government, you can see that I am coming to church, if we were informed, I would have atleast gone to another Bethel for today's worship". An onlooker whom we approached for comments retorted, "I dont know, this demolition is becoming something else, even if they must do it, must they do it on a sunday?".

Checks in Portharcourt revealed that the OOO and other such christain sects, also known as white garment churches have been in cold war with the penticostal churches since the assumption of office by the Rivers State governor, Mr. Chibuike Rotimi Amaechi. chidi opara reports have not been able so far to know the cause of the cold war.

The governor's closeness to the leadership of PFN, we learnt, have now provided an opportunity for the body to use the instruments of government to conclude the cold war in its favour. Today's demolition is believed to be one of the weapons in the PFN armoury.

Unconfirmed information at our disposal has it that the OOO in GRA phase111 Bethel, on 31st december, had a brush with a well known penticostal church in same vicinity where the governor worships sometimes. The leadership of the penticostal church according to contacts had threatened to report the matter to the governor. We have however, not been able so far to ascertain whether the matter was actually reported to the governor or whether today's demolition is as a result of the brush.
Posted by PublicInformationProjects at 05:08