Recall Of Nigerian Ambassador To USA Recommended By FBI 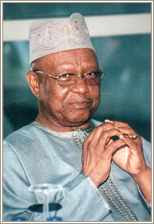 The recalled Nigerian Ambassador to the United States Of America(USA), rtd. Brigadier-general Oluwole Rotimi may have burnt his fingers because of his perchant for always resurrecting the Biafran issue.

Checks by chidi opara reports revealed that the former military officer played very significant roles in the prosecution of the Nigeria-Biafran civil war, which ended in favour of the Federal side on which the former Ambassador fought. His roles, as expected, endeared him to the Nigerian power epicenter based in northern Nigeria. This closeness, we learnt further, meant that the rtd. Brigadier-general got whatever patronage he wanted. It was also discovered that he was very close to the President's influential elder brother, the late rtd. Major-general Shehu Musa Yar'Adua, as well as other retired influential top military officers from northern Nigeria. "He was to be posted to any of the African Countries for the reason that he is not a career diplomat, infact that was what the Minister recommended, but somehow, the man lobbied and got the Washington posting", a highly placed contact in the Ministry of Foreign Affairs informed chidi opara reports.

Another highly placed contact in the same Ministry hinted at a classified Memo from the Federal Bureau Of Investigations(FBI) of the USA, in which it was indicated that the erstwhile Ambassador was in the habit of acting in ways that could resurrect the Biafran issue and thereby endanger the fragile peace in the former Biafran enclave,the South east of Nigeria. The Memo, we learnt, concluded by advising that the Nigerian Authorities should act fast on the information because according to the Memo, the USA will not like the Niger Delta situation to occure in any other region in Nigeria. It is not yet independently ascertained how and why rtd. Brigadier-general Rotimi acts to resurrect the Biafran issue, but a rtd. Colonel of Igbo origin, who does not want his name mentioned opined that the reason may be that by constantly resurrecting the issue, those officers who fought on the Federal side, hope to place their so called heroism and patriotism on the front burner for selfish reasons. "By constantly bringing up the matter, they hope to indirectly remind those of us from the South east that they actually own Nigeria", the rtd Colonel opined.

It will be noted that rtd. Brigadier-general Oluwole Rotimi was recently recalled from his Ambassadorial post in Washington DC for what the Nigerian Presidency describbed as insurbodination.
Posted by PublicInformationProjects at 06:06