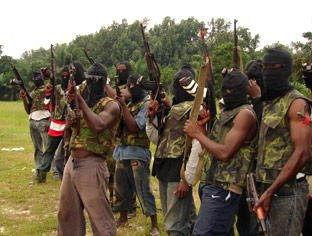 The Movement For The Emancipation Of Niger Delta(MEND)have warned foreign investors to stay off the Niger Delta, Nigeria's restive oil rich region, which MEND regards as its homeland and which it has been trying to "emancipate" through armed struggle.

This warning was provoked by the alleged action of the governors of Rivers, Bayelsa and Delta states recently in London in which the governors were alleged to have held meeting with some officials of the British government and some investors, where they were alleged to have assured those present that the situation in the region is now conducive for investment. The three states are major oil producing states in Nigeria's Niger Delta region.

"In the recent Chatam House Round table in London on the Niger Delta, the governors of the states of Bayelsa, Delta and Rivers attempted to deceive investors to believe that all is well in the region for investors. Such misrepresentation of the true situation by these men should not be a surprise to anyone aware that the governors are occupying their positions today, not by the mandate given by the Niger Delta people in a free and fair election, but by massive electoral fraud, rigging and the use of armed political thugs. These three men do not represent the masses in the impoverished region. The people on whose behalf they claim to speak for consider them stooges to the Northern Sultans and illegitimate bastards. While they sat there lying to the world, the Northern dominated army continued its killing spree of harmless civilians whose only crime was daring to protest the oil spills that have ravaged their fishing ponds, farmlands and drinking wells. While they stood seeping their cocktails, their agents were busy laundering ill-gotten wealth on their behalf into UK bank accounts under fictitious names. As they were being ushered to a sumptuous three course meal, two British oil workers were huddled together under a tent being pounded by the tropical rain deep in the sweltering mangrove creeks, eating canned meals from Heinz. The warning by the British Foreign office travel advisory for which these three criminals kicked against is real. Investors must beware because the Niger Delta is heading for anarchy. Only justice and not investment will produce a conducive atmosphere for genuine peace and development. Those talking to the wrong people in Abuja about investing in the trans-Saharan gas pipe project will be investing unwisely as we are determined to sabotage the project from inception".
Jomo Gbomo
Posted by PublicInformationProjects at 02:51