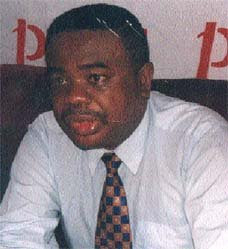 A former President of Performing Musicians Association Of Nigeria(PMAN), Mr. Tony Okoroji, who ruled the music scene in the late 1980s and early 1990s with chartbursters is set to launch a book on copyright.

A news release titled "Okoroji's Book Launch To Be An Intellectual Property Summit" by the Musician's committee of friends, made available to chidi opara reports reads:

"The forth coming red carpet launch of Chief Tony Okoroji’s ground breaking book, Copyright, Neighbouring Rights & the New Millionaires is being planned as an important summit of the various interests in Intellectual Property in Nigeria. The friends of Chief Okoroji who are organizing the launch are presently engaged in a major rally of the stars of music, theatre, movies, literature, broadcasting, publishing, the media and the leading lights in law, the judiciary and Nigeria’s academia. Friends of the intellectual property community and important business and political figures with interest in intellectual development, are also expected at the Class ‘A’ event. The purpose is to use the occasion to kick start a robust national dialogue leading to the reform of the Intellectual Property landscape in the country.

The Committee of Friends of Chief Tony Okoroji which is responsible for the red carpet launch has said that one of the best ways to honour this dogged fighter for the rights of Nigeria’s creators is to give strong support to the promotion of intellectual property rights in Nigeria to which Okoroji has dedicated a significant part of his life. It is well known that Chief Okoroji as President of PMAN led the vanguard for the birth of the Nigerian Copyright Law. Employing his tremendous writing and speaking skills, he organized several rallies and demonstrations across the country which forced the hands of the military government to promulgate this most important piece of legislation for the Nigerian creative community. Chief Okoroji who served in the committees that drafted both the Nigerian Copyright Law and its first amendment was also in the forefront of the efforts that led to the establishment of what is today known as the Nigerian Copyright Commission. He was instrumental to the setting up of both the Nigerian Association of Recording Industries (NARI) and Performing & Mechanical Rights Society (PMRS) of which he is presently the chairman. Chief Okoroji has also participated actively in the efforts to reform the laws and management of other parts of Intellectual Property such as Patents, Trademarks and Industrial Designs.

Tony Okoroji’s Copyright, Neighbouring Rights & the New Millionaires establishes a link between a sound intellectual property regime and the new knowledge economy with its integration with Information Technology and the Internet that is creating enormous wealth around the globe. The book does an unprecedented analysis of the Nigerian copyright and neighbouring right regimes, using free flowing language and easy to relate illustrations to create an invaluable tool for every practitioner in the creative community and every student of intellectual property. The book which has been given very high marks by experts around the world will be launched by an all star audience at the Nigerian Institute of International Affairs, Victoria Island Lagos on Tuesday, April 28, 2009. The organizers are assuring all guests that the event will feature cutting edge entertainment and the state of the art organization for which Tony Okoroji, the prime mover of Nigeria’s most celebrated events, is famous.

Among the various groups supporting the red carpet launch are Minuteman Press of Philadelphia USA which is printing the book and the Norwegian Copyright Development Association (NORCODE)".


UCHE ONUNKWO
For: The Committee of Friends of Chief Tony Okoroji
Posted by PublicInformationProjects at 02:31 No comments: