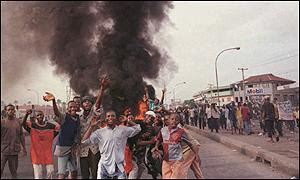 Investigations by chidi opara reports have revealed that Nigeria's South Western region known in the 1960s as wild wild west may erupt into violence again following efforts by progressive and conservative elements to take over governments in two strategic states of the region, Ekiti and Osun states.

The Court of Appeal acting as the final arbiter in election matters had recently nullified the election of Mr. Segun Oni, former governor of Ekiti state and candidate of the Peoples Democratic Party(PDP) and ordered a re-run. Mr. Oni's major opponent is Mr. Kayode Fayemi of the Action Congress Party(AC). The appellate court also ordered re-trial of the Osun State case, which the opposition hope will result into nullification and consequently, a re-run.

Our network members in both states report that the conservative elements who are operating under the banner of PDP have perfected plans to use both lawful and unlawful means to take power in both states. These conservatives whose commander is a retired top naval officer are not leaving anything to chance. They, we learnt further have sucessfully mobilized money through a young businessman with huge interest in Insurance and another who is into downstream petroleum products marketing. Financial contribution is still being expected from another young downstream petroleum products marketer, who is also a relation of a former governor
of one of the south western states. Part of this money, chidi opara reports reliably gathered would be used to compromise security agents during the Ekiti re-run election of April 25th, 2009.

"My brother, these people are desperate, their loss in Ondo state have made them more desperate", a contact in Osogbo volunteered to one of our network members on condition of annoynmity, apparently for fear of physical attack.

The progressives led by a former governor in the region and a stalwart of AC, who recently celebrated his birthday anniversary with fanfare, are not resting.
Our investigations revealed that they are relying on financial contributions from the governments of Edo, Lagos and Ondo states. The governors of Imo, Anambra and Abia states have also pledged some amounts. "Our interest is to see the PDP dislodged from most states", a highly placed official of Abia state government informed chidi opara reports in Umuahia.

The progrssives are also relying on the goodwill it enjoys within the populace. "our fall back is to mobilize the people for mass action if the Ekiti election is rigged again", an AC insider informed us in Lagos. Progressives are also using their contacts within the vocal radical members of Nigerians In Diaspora Organization(NIDO) and Afenifere Renewal Group(ARG) to sensitize the International community on the need for the Nigerian Presidency to ensure a free and fair election re-run in Ekiti state, through the Internet. This campaign is being co-ordinated by a United States Of America(USA) based Professor and a well known ARG chieftain based in Nigeria.

A senior security contact in the Presidency however informed chidi opara reports that, "we are watching the two states with keen interest".
Posted by PublicInformationProjects at 03:17 No comments: