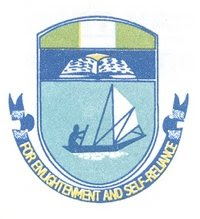 The University of Portharcourt, also known as UNIPORT is fast assuming the reputation of a citadel of prostitution instead of learning. UNIPORT is one of the federal Universities established after the Nigerian civil war to carter for the increasing educational need of the country.

chidi opara reports investigation revealed that as early as 7.00pm each day, the "Abuja" and "Delta" camps witness a burst of prostitution activities involving female students and patrons from Portharcourt and environs.

These patrons who are usually well placed members of the society come in various types of exotic automobiles and can be seen parked on the car parks at "ofirima" junction of "Abuja" camp and 'the crab" mini-theatre of "Delta" camp, playing loud hip-hop musics to attract the attention of their targets, who are always hanging arround such spots. Initial contacts with these ladies are usually through the pimps who always accompany these patrons to these locations. These pimps are usually male students or immediate past students of the University.

An encounter between a male network member of chidi opara reports and miss "Anita Philips"(not her real name) revealed how the "deals" are struck. On the day in question, at about 8.45pm, our network member who had been at the "Ofirima" junction car park for about an hour, watching the activities therein, spotted the scantily dressed "Anita Philips", a lady in her early twenties, studing sciology at the University. When "Anita" was approached, she made it clear that she was ready to go with him for the night if the destination is within portharcourt, if he could pay the sum of ten thousand naira. The price was subsequently negotiated to seven thousand naira and our network member left, promising to come back with the money in few minutes.

According to "Anita", if the destination is any of the government lodges in Portharcourt, Umuahia, Yenagoa, Owerri, etc or any of the major hotels in portharcourt and environs, the price would start from twenty thousand naira. Payments are usually by cash. Cheques are however accepted, depending on how credible the patron appear.

Another female student who is also into campus prostitution whom chidi opara reports encountered at the "Delta" camp on a different day, volunteered after a few bottles of extra smooth stout, "bros, if we do not do RUNS, we cannot pay our school fees and other expenses, some of us come from poor homes". "RUNS" in this context means campus prostitution.
Posted by PublicInformationProjects at 02:18 No comments: