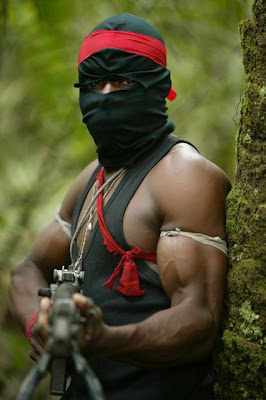 Information reaching chidi opara reports from the creeks of Nigeria's volatile oil and gas region, the Niger Delta where fiece gun battle have been raging for two days between the Movement For The Emancipation Of Niger Delta(MEND) and the Joint Taskforce On Security(JTF), indicate that Nigeria's top oil militant, Mr. Government Ekpomupolo, popularly known as Tom Polo, narrowly escaped death and is now on the run. Tom Polo's tactical headquarters is the now captured camp five located in the Gbaramatu area of Delta State.

Our network members report that at about 2.45am on saturday, 16th May, 2009, the JTF launched an aerial and sea attack at the camp, believed to be the most organized and fortified militant camps on the creeks of Niger Delta. The initial attack we learnt was repelled by the well equiped MEND fighters, prompting the commander of the JTF operation to call for re-enforcement. About one hour later, two helicopter gunships three gunboats and some troops were deployed from the JTF base in Warri. "The last battle was bloody for us and JTF, but we lost more", a MEND insider told chidi opara reports on telephone. Another MEND insider volunteered that Tom Polo, who fought with everything at his disposal to secure his tactical headquarters, was the last person to leave the camp. "General and his priestess were the last to leave the camp, they left at about 4.15am", our contact revealed further.

Tom Polo is credited with the personality of a "gentleman militant". He is not known to engage in vices like cultism, sea piracy, etc. He is said to be focused on the "struggle", and does not get distracted by proceeds from illegal oil bunkering. He is also said to be loyal to the incarcerated Henry Okah.

At the time of preparing this report, chidi opara reports have not been able to certain the reason for the attack on this top oil militant, known to have good working relationship with oil majors and the military high command.
Posted by PublicInformationProjects at 06:51 No comments:

Network members of chidi opara reports in Abuja, Nigeria's capital city report of desperation on the part of associates of the House Of Representative members detained by the Economic And Financial Crimes Commission(EFCC), on allegation of fraud at the Rural Electrification Agency(REA). The detained law makers are: Ndudi Elumelu, Nicholas Ugbane and Mohammed Jibo.

This desperation we learnt was due to subtle threats by the families of the detained law makers to spill the bean on other scandalous activities of the leadership of the House, which are capable of generating enough furore that would lead to the removal of the entire house leadership, if no political solution to the current ordeal of the detained law makers is found soon.

chidi opara reports learnt on good authority that a top level security operative from the south west, who is a close friend of one of the detained persons have furnished the influential elder brother of his detained friend, with some damaging details of the House Leadership's, especially, the speaker's and the Deputy speaker's involvements in the upstream sector of the Petroleum Industry. These details we learnt further, have been forwarded to the speaker and Deputy speaker. The Senate leadership, according to our National Assembly contacts are not spared in the threats. "These people are now working behind the scene to prepare a soft landing for the detainees", a contact close to the family of one of the detainees informed us in Asaba yesterday. It is also learnt that some notable personalities are working hard on their own to ensure the early release of the detainees. These personalities according to investigations are those who harbour private fears that further probe into the affairs of one of the detained law makers, whose relation is a top flight finance professional may expose some of their illegal financial dealings over the years.

A chidi opara reports' EFCC contact however, inform that the Commission would arraign the detainees in court soon.
Posted by PublicInformationProjects at 06:04 No comments: 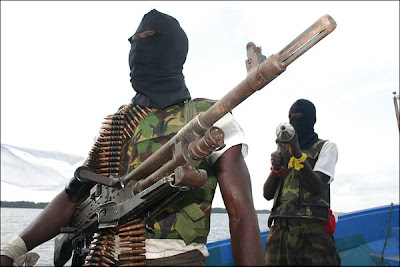 Considering that ours is a war of detachment and our camps are not meant to serve as permanent barracks, fighters from Camp 5 simply relocated to another camp with all their weapons and ammunition's intact. This is normal in guerrilla warfare.

We are embarrassed at the dismal performance of the Nigerian armed forces who performed like poorly trained amateurs by bombing indiscriminately into civilian communities using helicopter gunships and fighter jet planes. Civilians should have been allowed to leave the area before the attack. This simply has shown that the government is insensitive to the Niger Delta people.

If the army's mission was to also rescue the hostages, then that again was a botched and ridiculous attempt because the hostages were not at any immediate risk to their lives except for their temporary freedom.

We regret to announce that two hostages have been killed by the indiscriminate shelling and two more are still in our custody. We are happy that all of them were not killed by the army. The bodies of the dead men will be handed over to the Red Cross. MEND deeply regrets the avoidable deaths.

It is not true that the army captured a plane from Camp 5. If my memory serves me right, the plane in question is a toy remote controlled plane which can be purchased from any toy shop. It is rather shameful that they can not distinguish the difference between a toy plane and a drone.

As promised, we have begun nibbling again at the oil infrastructure. Already, two major trunk pipe and gas lines which were recently repaired have been blown up. This is just the tip of the series of attacks we plan to carry out.

For the Nigerian government to declare victory, troops must be able to secure every inch of pipelines and eliminate the over 500 camps stretching from Ondo to Akwa Ibom.

What the government has been successful in doing is committing genocide against the Ijaw communities whose offense it seems is discovering oil in their backyards.

Our message to the Northern Sultans and Emirs is this: The period of exploiting the Niger Delta is coming to an end. It is not the birth right of your people to rule the Federal Republic of Nigeria. The war is just beginning and by the time it ends, Nigeria will practice true federalism such as fiscal federalism which will benefit the entire populace. Let your people brace themselves to develop their resources and such a bold change will be remembered.

Our fighters in Delta state have not requested for reinforcement from other states. They are conducting the battle very well and every night the military is depleted by about an average of ten soldiers.

General Tompolo is alive and well. He was in unilateral discussions with the government on a peaceful way forward but that did not mean he would close his eyes and watch soldiers disrupt a local festival by harassing innocent visitors to the event.

Since they did not disrupt the Argungu festival in the North, it was not acceptable to disrupt ours in the South. The skirmish which saw the loss of over twenty soldiers and an officer as well as the sinking of two gunboats on Wednesday the 13th of May which the army has found it hard to admit resulted in the punitive expedition of the Gbaramatu kingdom.

The British hostage, Mr Mathew Maguire has been relocated to Delta state and will be a guest of one the camps there.

Nigerians should now brace up for the worst from the decisions from an incompetent leadership.

The Niger Delta people who have endured injustice and genocide for over 50 years must be ready to fight for change as our destiny should not be in the hands of others but ourselves.

Since the destruction of pipelines, manifolds and flow stations will be numerous, we may not announce everyone of them as it happens.

Jomo Gbomo
Posted by PublicInformationProjects at 05:56 No comments: