Information available to chidi opara reports indicate that the mandate of the Joint Taskforce On Security(JTF), currently engaged in fiece gun battle with the Movement For The Emmancipation Of Niger Delta(MEND) in the creeks of Delta State, may be expanded, if the advice of a group of shadow security advisers to the President is accepted. The JTF currently have a mandate that is limited to the Niger Delta region.

This group, according to a senior Presidency contact, "met recently and forwarded a memo to Mr. President to expand the JTF mandate to include the South-eastern and the South-western regions of the country". This group we learnt comprises retired senior security and military personnels from Northern Nigeria. It has a retired Colonel who served in the military intelligence corps during the regime of Ibrahim Babangida as leader. We are however, unable to sight the memo in question, as our contact's promise to make a copy available to us was not fullfilled at the time of preparing this report.

Another contact close to the Presidency told a chidi opara reports network member in Kaduna that "Mr. President is studying the memo and other related memos, he will take decission on the matter at the appropriate time".

The reason for this advice we learnt is the fear within the group that "disgruntled elements" in the South-west and South-east may take advantage of the situation in the Niger Delta to cause more trouble. The South-east and South-west are the locations of the Movement For The Actualization Of Sovereign State Of Biafra(MASSOB) and the Oodua Peoples Congress(OPC) respectively. MASSOB and OPC have separatist agenda.

Meanwhile, chidi opara reports can now reveal that there is increased security survillance on some vocal elements in the country. We can now confirm that security survillance on Professor Pat Utomi, Mr. Yinka Odumakin, Professor Tam David-west and others have increased in the last few days.
Posted by PublicInformationProjects at 09:47 No comments:

Ten Years Of “Democracy” And Two Years Of Yar’Adua As President: Nothing To Cheer!(News Release By Campaign For Democracy) 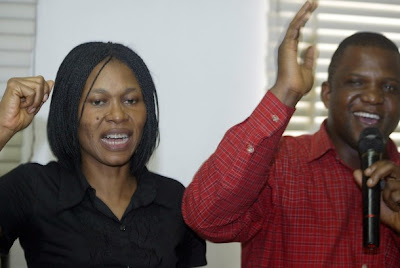 The Campaign for Democracy, CD, has assessed ten years’ of Nigeria’s search for democratic expediency and two years of the former President Olusegun Obasajo-imposed Umar Yar’Adua and concludes that there is nothing to cheer!

Ten years after Nigeria’s return to civil rule, and, two years into Yar’Adua’s presidency, it is so far, so worse: as there is nothing to celebrate!

It is sad that, especially, two years into President Yar’Adua’s rule, Nigeria is still in search of the true meaning of democracy. Even, the civil rule which we pretend to have on hand now has to be appropriately situated more especially, since there is already a debate on the level of civility in an administration that has to use soldiers to supervise bye-elections in just 63 wards in Ekiti State; an election which, at the end of the day, still left the electorate raped and robbed.

In truth, one of the basic ingredients of democracy is periodical election, with the electorate deciding who rule them. But, if we may ask: from the presidency, to the ward level, how many of those who currently occupy office in Nigeria today can claim to have been truly elected by the people?

Another kernel of democracy is openness and transparency. All over Nigeria’s landscape, government activities continue to be guided in secrecy like the Okija Shrine tactics. The Freedom of Information, FOI, Bill has been kept in the cooler and nobody knows whether it will see the light of day again. Of course, this is understandable! After all, all tiers of the Nigerian government, from the executive, to the legislature; are bogged down by corruption. Even, some sections of the judiciary are not left out of this ‘largesse.’

It is sad that, ten years on, it has been tales of scandals upon scandals: Siemmens, Halliburton, Power Probe, Rural Electrification Agency fraud, unspent funds, looting of recovered loot, etc. As if these are not enough, the recent report by the Auditor General of the Federation which showcased corruption at the three tiers of government was a sartorial attestation to the fact that all is not yet well even with Nigeria’s so-called civil rule.

The most interesting part of it all is that Nigeria’s anti-corruption has practically gone to sleep. What we have now are propaganda and mouthing of platitudes.

Socially, there has been an upsurge in the war song of poverty. Minimum wage remains at a paltry N7,500.00 which cannot even buy a bag of rice in any of Nigeria’s market patronized by both the rich and the poor. Yet, our political office holders swim in billions of naira.

In our clime, power situation remains comatose. Added to this is the fact that Nigerians continue to live in want amidst plenty even as they daily queue for the resources for which she ranks 6th in its production globally (fuel). Security of lives and property in the country is daily degenerating even as the Nigerian culture of impunity and might continues to rear its head. And, as if to add salt to our already festering injury, one of President Yar’Adua’s birthday gifts to Nigerians is the genocidal war that is going on in the Niger Delta.

However, despite all these, Nigerians must still have hope and a future. The way forward therefore is for Nigerians to take their destiny in their own hands and fight for a new order.