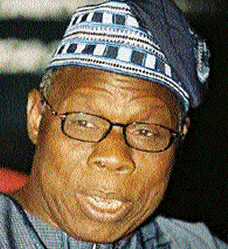 The top vacant positions at the Niger Delta Development Commission(NDDC), namely; chairman, Managing Director and Executive Director(Finance And Administration), which have been zoned to Rivers, Bayelsa and Delta States may not be filled by persons who do not have the approval of the immediate past President, Rtd. General Olusegun Obasanjo. The erstwhile President is the Chairman, Board of Trustees of the ruling Peoples Democratic Party(PDP).

Rtd. General Olusegun Obasanjo whom chidi opara reports reliably gathered was able to survive series of indirect political harassments by the President, whom he single handedly installed in office, as a result of his possession of very damaging facts on the involvement of the President's family in the economic woes of the nation since 1960s, successfully positioned one of his proteges, Mr. Ufot Ekaette as the Minister incharge of Ministry of Niger Delta Affairs. Ekaette was Secreatary to the Federal Government in the immediate past Obasanjo Administration. He is presently the anchor person in this new task.

It was a surprised governor Chibuike Rotimi Amaechi, chidi opara reports learnt, who recently on a visit to "Aso Rock", the seat of the Nigerian Government, was asked by the President to see Obasanjo if he hopes to make a headway with his NDDC nominations. Amaechi had gone to the Presidency to submit the names of Tonye Princewill and Chibudom Nwuche for the NDDC Managing Directorship position. When the Governor recovered from his surprise and procceeded to see Obasanjo, he was again directed by an Obasanjo aide to see Mr. Ekaette. Contacts in the Niger Delta Affairs Minister's Office informed chidi opara reports that the Minister pointedly told him that the name of Tonye Princewill should be dropped. "It is very clear that Amaechi heeded the advice", a contact close to the governor informed us yesterday in Portharcourt. Niger Delta Affairs Ministry insiders however, told us that Mr. Princewill, an Action Congress(AC) party chieftain cannot be trusted with such a strategic position even if he joins PDP now. Tonye Princewill contest against the PDP candidate in the 2007 governorship election in Rivers state, he is currently a participant in the Amaechi Administration.

Emissaries of these governors, chidi opara reports learnt on good authority have practically been chasing Mr. Ekaette and his Senator wife arround Abuja, Lagos and Uyo, in the bid to push the names of their nominees to Obasanjo.
Posted by PublicInformationProjects at 02:50 No comments: