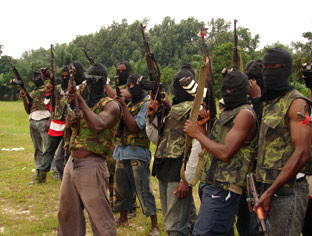 I hope this letter reaches you and your family well.

Your recent call again to lay down arms as you received a report from the Godwin Abbe panel set up to work out the details of your amnesty offer is the reason I write you on behalf of the Movement for the Emancipation of the Niger Delta (MEND).

The whole ceremony was like a deja vu. It is no different from the show you put up when you received the report of the Niger Delta Technical Committee which was never implemented.

The civilized world expected your apology to the hundreds of displaced and relatives of dead civilians caused by the indiscriminate aerial bombing targeted at innocent impoverished communities from a cowardly armed forces meant to instill fear.

Without root issues addressed, the efforts of this panel will be another waste of time. The very reason for militancy is because of injustice. Fiscal federalism is among the things that will silence our guns.

We are not intimidated by the size of your armed forces or impressed by its latest acquisitions because that has never won a war. The Americans can tell you that from their experience in Vietnam.

A simple reversal to fiscal federalism will save you the trouble of another future ceremony where you are made to receive piles of worthless paper.

Jomo Gbomo
Posted by PublicInformationProjects at 02:30 No comments: